Decking the Halls as the Gilding of America Continues

In case you missed it, the website of Bill Moyers has published an excerpt from a new book The Age of Acquiescence by historian Steve Fraser.

The book concerns the Robber Baron era of Industrialism, the 1880s into the 1900s (sometimes called the 'Generation of Materialism' or 'The Gilded Age') and relates the era to America's current 'gilded' conditions. The complexity of today's conditions is addressed as the book notes an obvious difference: then the populace rose up against the inequities, oppression, and exploitation perpetrated by the Plutocracy and their political enablers--unlike today's watered down efforts by a largely apathetic public.

Since the founding our nation, America has had a 'materialism v spiritualism' conflict (Saturn v Neptune) and perhaps we may say that Alexander Hamilton and the monarchists have won. And unfortunately for most Americans, the November 4, 2014 mid-term election outcomes in Congress will prove this tragically the case as 2015 proceeds along with SCOTUS' 'Citizens United' treason against the foundation of our alleged democracy.

Now if you're in the mood for a little Astrology concerning such topics, perhaps you'll consider the Robber Baron-Gilded Age era as timed by the Taurus New Moon of April 28, 1881. Here's a view of a previous post concerning the Natal Horoscope of the Robber Barons with a few notes. (No edits have been made so the post includes some then-timely Campaign 2012 content).

Actually, here is the post's horoscope so that a quick peek may be taken: 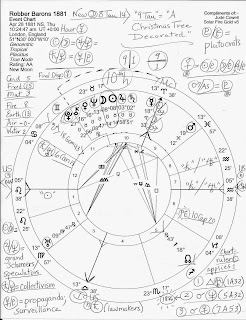 Most likely this is my last post until after Christmas so my warm thanks and best regards go out to all Followers, reTweeters, and Google+ers of this and my other blogs and posts as 2014 draws to a close (you know who you are!)

Sending well wishes for a wonderful and joyous holiday season to you and yours!