This C-SPAN interview concerning Rachel Carson, pioneering author of Silent Spring, may be educational for those with environmental and ecological interests--which include everyone who lives on planet Earth:

Quite a while back I published the natal horoscope of Rachel Carson with a few details and here it is as previously displayed: 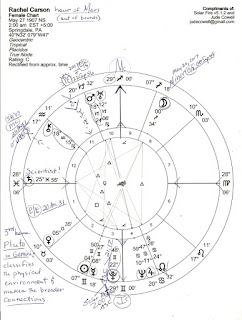 Curiously, Carson's Pre-Natal Solar Eclipse Series is the 17 South and prior to her birth, 17S manifested @22Cap56. I say curiously because 17S happens to be the Series we are now in since the Spring Equinox Solar Eclipse @29Pis27 is in effect until at least September when a new eclipse occurs @20Vir10 in the 18 North Series. As you know, 29Pis27 conjoins the Aries Point (00Ari00:00) of World Manifestation, Prominence, Recognition, and Fame but the 29th degree of any sign is a critical-crisis degree. And actually, I believe the 17S eclipse remains in effect for the year until Spring Equinox 2016 in tandem with the Aries Ingress 2015 horoscope.

(An eclipse near the Saturnian South Node of the Moon indicates that energy rushes out of the chart, not in, as with a Jupiterian North Node eclipse.)

In addition, the March 2015 eclipse conjoins Carson's natal Ascendant and in my estimation describes the desperate condition of planet Earth now that Robber Barons and their plundering descendants (both biological and ideological) have pillaged so many of our planet's resources, then refused to take responsibility for the messes they leave behind--or will leave behind with the carnage ongoing. No one can say that Rachel Carson didn't warn us.

So now we're being warned yet again via the 2015 Spring Equinox Solar Eclipse at crisis point...

For more details on Rachel Carson and her natal chart, read my original post here.