For an Unpopular Democrat in the White House try President Andrew Johnson!

When we speak of unpopular even reviled Democrats in American Politics who can forget the nearly-impeached President Andrew Johnson who staggered into the Oval Office after the assassination of Abraham Lincoln? Here's the drunken, high-handed cuss now: 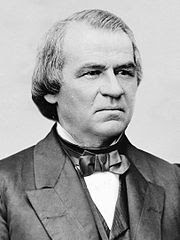 Now I'm not certain you're up for it but if you are you may check out the natal horoscope of President Johnson to your heart's content. However, it's only rated 'C" because the accuracy of his birth data is in question. Now does he have lovely Libra rising as his birth time indicates? Perhaps but if so he must have been a looker in his youth because...well, let beholders judge the visage of this stern and stubborn fellow with their own eyes.

Well, let's at least consider his pragmatic Sun Capricorn-Moon Taurus personality blend which should have given him common sense enough to avoid overindulgence in alcohol. Yet I suppose the last degrees of comfort-loving Taurus contained the difficult fixed stars of the Pleiades, then as now, which may have added an Alcyone influence to his life and the 'something to cry about' theme of that star which suggests a potential for crying in one's beer out of self-pity.

Sun Cap-Moon Taurus provided the Honorable Mr. Johnson with organizational skill, shrewdness, and made him a 'staunch supporter of the status quo'. Diligent and hardworking, this earthy blend denotes reliability, worldliness, loyalty, and frugality--he was a time and place for everything kind of guy who was attached to familiar routine. Inflexible and possessive, Johnson had a tendency to be over materialistic and devoted to tradition.

It may be that other chart factors mitigated the more admirable traits of Sun Cap-Moon Taurus and not necessarily in a positive way which led to his extreme unpopularity. Liver impairment, if present, can make anyone overly moody, emotionally touchy, and can bring out the bitterness--and he was born under a depressive Saturn-Neptune conjunction and had testy, quarreling Mars rising (as does Donald Trump). But however he treated himself (or pickled himself with certain libations), it may be instructive to list a few famous personages with whom his natal Sun-Moon blend is shared, and a name or two may surprise you:

Double Earth Sun Capricorn-Moon Taurus natives include: Barry Goldwater, Graham Chapman (of Monty Python), Carlos Castaneda, Isaac Asimov, and--this one surprises me: Danny Kaye, Mr. Brew That Is True himself! Of course, there's old demon alcohol again but actually not in this case because 'the poison is in the vessel with the pestle, not the chalice from the palace'! Such an admonition is worth remembering.