With his exact birth hour a mystery, there are at least three potential natal horoscopes for comedian, actor, and political satirist Stephen Colbert. Tap or click for the data some of which has been rectified based on the timing of known life events and view versions of his natal chart while you're there.

Born May 13, 1964 in Washington DC, Mr. Colbert, now host of CBS's The Late Show, has Sun in Taurus with a chatty Gemini Moon. His rising sign may be Jupiter-ruled Sagittarius (4Sag21 in the 9:02 pm version, 22Sag42 in the 10:30 pm chart) which loudly hints at a comedic persona (Jolly Jupiter!)

This is an Earth-Air blend of energies that supply him with innovation, efficiency, and rationality. Abstract thought melds with practical considerations to form the clear-headed, scientific approach of a pragmatic idealist. When Sun is in creative Taurus and Moon is in communicating Gemini ruled by Mercury, the messenger and trickster, we see hilarity concerning everyday issues and satire of the public figures who well deserve the ridicule.

Other traits many include the wit and flippancy of a penetrating conversationalist graced with 'the gift of gab'--a bit of an Irish signature. A charming opportunist, Mr. Colbert has an ability to sway the views and perspectives of others which makes a job on TV the perfect soap box for his Gemini Moon to broadcast from while the Taurus Sun keeps things down-to-earth. Of course, parenting children tends to puncture big heads, too!

On a difficulty level, Mr. Colbert may have to adjust some bullying tendencies and work on his lack of consideration for the emotional side of things if he should overdo his reliance on rational analysis. 'Unflappable and detached' describe his style but there is also a great sense of playfulness which the public sees in each episode of The Late Show and in every facet and stage of his comedy career.

Then if we check for an apt 'Image for Integration' describing Stephen Colbert's solar conscious mind when working harmoniously with his lunar unconscious, we find this: "A wealthy publisher launches another new project." (Sun Sign-Moon Sign, Charles and Suzi Harvey) which reminds me of his hilarious books!

And for the sake of Jolly Jupiter, here is a popular illustration by Edward Lear from his Nonsense Drolleries, The Owl and the Pussycat (1889): 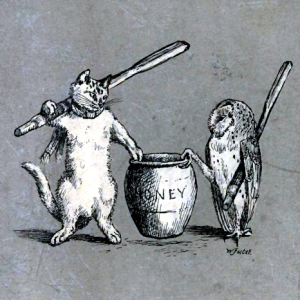