Before long we shall have little option but to discuss the Inauguration 2017 horoscope. However, before we do, here's a list of the 2017 Oath of Office midpoint pictures with a few potentials for their manifestation added, plus, brief notes on the Sun-Moon traits of the day (January 20, 2017 12:00 pm est Capitol Building, DC).

The midpoints of planetary energies blended together "unleash" the power of the planets involved though the apex planet may or may not activate the midpoint at that precise moment. In addition, the pictures are subject to further transits and progressions once the 'baton is passed' and the presidential term proceeds. Apex planets are: Sun (leader), Pluto (power, hidden wealth, manipulators, the pope), Venus (values, money, relationships, the goddess honored in her various guises all over Washington DC), and veiling Neptune, planet of the masses and of the media. Also added is the 1993 Uranus-Neptune conjunction which transit Pluto now activates.

Please enlarge the image and hopefully you'll be able to read my messy scribbles: 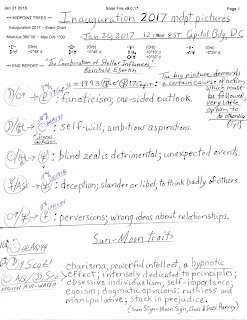 Sun = POTUS; Moon = We the People; note that 'Sun AQ-Moon Scorpio' is also the combination of the Obama Inauguration of January 20, 2009. Will we get a familiar feeling?

"Unleash the power of the planets" refers to an excellent midpoint book by Michael Munkasey which is not used, above. Instead, midpoint pictures are from The Combination of Stellar Influences, by Reinhold Ebertin except for the Uranus-Neptune = Pluto pic from Solar Arcs by Noel Tyl.