The Thales Eclipse and a Peacock of Venus 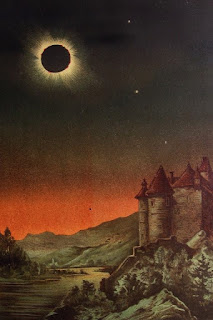 Both Solar and Lunar Eclipses have storied histories as omens and heralds of change similar to that of comets which enter Earth's neighborhood and thus humanity's consciousness. Eclipses are often described in Astrology as 'wild cards of the Universe' for the unpredictable disruptions they seem to bring which result in chaotic conditions. In this they have resonance with astrological Uranus, also a 'wild card' and planet of electricity, lightening, eccentricity, disruption, innovation, revolt, and that 'bolt from the blue' that no one was expecting. Also described as cosmic blinks, eclipses tend to uncover secrets especially when applied to mundane horoscopes and conditions of the Collective; plus, Uranus is often seen as a mark of genius and originality...and/or contrariness.

As you know, there are famous eclipses down through history such as those that were used to prove Einstein's Theory of Relativity: 1919's 11 South when proof efforts were disrupted by World War I, and 1922's more successful 15 North. But perhaps the granddad of eclipses--if we can count on The Histories of Herodotus--is the first-ever reliably predicted eclipse by Thales of Miletus, of Thales Planet fame. Now I know there is debate on whether Thales was predicting a solar or a lunar eclipse but I'm going with a solar eclipse until there's more evidence for a lunar one. However, since it manifested so long ago, more evidence may never come to light so let's consider the date of May 28, 585 BC.

To view the eclipse path and for more details, see Wikipedia.

How Thales was able to predict the eclipse back when human kind was allegedly stupid may be debated but reasonable theories do exist. Also see Historical Astrology for debunking of the theory that Thales somehow used the Saros Series for prediction.

So here's a bit on the Thales Eclipse as given by my Solar Fire v9 software and including its Sabian Symbol:

Solar Eclipse May 28, 0585 BC; Sun-Moon 29Taurus43:46 Saros #57; 29Taurus43 rounded up gives '30Taurus' = "A Peacock Parading on the Terrace of an Old Castle...Keynote: The personal display of inherited gifts...As a great occultist once wrote: Adepts are the flowering of their races and cultures".

*Rudhyar continues: "The peacock is the bird consecrated to Venus; in occult tradition the Promethean Spirits who gave to animal mankind the divine gift of self-conscious intelligence had come from 'Venus'--which may or may not refer to the physical planets we can observe in the sky. {} This peacock symbol indeed confirms the social status of the ancestral state. It indicates a CONSUMMATION of individual efforts; and it suggests that such a consummation is hardly possible except when a line of 'ancestors'--biological or spiritual--forms its base."

Interesting that "self-conscious intelligence" is mentioned since cosmic blink eclipses tend to bring hidden information into the Collective's conscious awareness, and for politicians this usually indicates the ill-timed uncovering of inconvenient truths.

But let's ignore Politics and close with a tribute to Venus and her favorite bird: Princess of India (2007) from my drawing collection Secret Moon Art--can you spot the peacock? 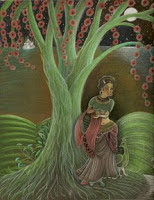 To view a horoscope containing a Thales Planet you may wish to see the June 1, 2015 Progressed Full Moon of George Washington with authoritative Saturn playing Thales Planet @11Aries, the "President of the Country" Sabian Symbol. As such, SP Saturn sextiles his SP Moon and trines his SP Sun!

And did you know that there's a Thales Academy with an online publication, The Thales Times--tap or click for an article about the potential discovery of A New Ninth Planet.

Note: type 'Eclipses' into the SO'W Search field in the sidebar and you'll find a plethora of posts, some displaying horoscopes that are most often set for Washington DC. But in case you miss it, here's a post concerning the upcoming Great American Eclipse of August 21, 2018 in the 1 North Saros Series which is the first repetition of the August 11, 1999 Solar Eclipse (DC horoscope shown), aka, Nostradamus' 'King of Terror' or 'Alarm' Eclipse or, The Mother of All Eclipses. And yes, this is the eclipse described in Scriptures for its Fixed Grand Cross involving the Oxen, Lion, Eagle, and Angel Points at the mid-degrees of the Fixed signs. History doesn't repeat, it rhymes, so some repetition of 1999 events may express in similar fashion in 2018 and relate specifically to the United States of America and to the US presidency.

*'30Taurus' and '11Aries' Sabian Symbols from An Astrological Mandala by Dane Rudhyar.