Hoover Inauguration 1929 and "the idealism of America"

Here's a bit of cherry-picking from the Inauguration Address of Herbert Hoover on March 4, 1929, president number 31, with brief astro-notes to follow. "No desire for territorial expansion"? The "extinction of force"? Any hypocrisy and propaganda are left intact and in his full address (linked, below) the 18th Amendment (Prohibition) makes a cameo appearance:

"The United States fully accepts the profound truth that our own progress, prosperity, and peace are interlocked with the progress, prosperity, and peace of all humanity. The whole world is at peace. The dangers to a continuation of this peace to-day are largely the fear and suspicion which still haunt the world. No suspicion or fear can be rightly directed toward our country.

Those who have a true understanding of America know that we have no desire for territorial expansion, for economic or other domination of other peoples. Such purposes are repugnant to our ideals of human freedom. Our form of government is ill adapted to the responsibilities which inevitably follow permanent limitation of the independence of other peoples. Superficial observers seem to find no destiny for our abounding increase in population, in wealth and power except that of imperialism. They fail to see that the American people are engrossed in the building for themselves of a new economic system, a new social system, a new political system all of which are characterized by aspirations of freedom of opportunity and thereby are the negation of imperialism. They fail to realize that because of our abounding prosperity our youth are pressing more and more into our institutions of learning; that our people are seeking a larger vision through art, literature, science, and travel; that they are moving toward stronger moral and spiritual life—that from these things our sympathies are broadening beyond the bounds of our Nation and race toward their true expression in a real brotherhood of man. They fail to see that the idealism of America will lead it to no narrow or selfish channel, but inspire it to do its full share as a nation toward the advancement of civilization. It will do that not by mere declaration but by taking a practical part in supporting all useful international undertakings. We not only desire peace with the world, but to see peace maintained throughout the world. We wish to advance the reign of justice and reason toward the extinction of force."

(My italics, above.) Here's a link to more details and Mr. Hoover's Full Address.

Update 7.12.17: to me, Herbert Hoover's above remarks read like cynical persuasion using certain code words for the savvy. But unlike Trump, Hoover's communication with the public is here and elsewhere formed into complete sentences. Mr. Trump eschews such a formality and he employs constant diversionary tactics while preferring to work, as I've heard, from within states of chaos which puts most other people at a disadvantage and gives Donald Trump an 'edge' in any game, or so he imagines. His behavior patterns may be wide but are trackable and there's that large amount of unconscious material constantly seeping---nay, leaking--up from within the recesses of his Sneaky Mind (Mercury square Neptune, Alan Oken).#

It was with Franklin Roosevelt's second inauguration that the inaugural date was switched from early March (1933) to January 20, 1937 which turned our presidential Sun from 13Pisces to 00Aquarius and Inauguration Ascendant (the Oath of Office) from early Cancer to 13/14Taurus. But those weren't the only astrological changes in our presidential horoscopes, of course, and a closer study of the two charts (the 'as if' March 4, 1937 vs the actual January 20, 1937) yields interesting differences. Add FDR's first Inauguration Horoscope set for March 4, 1933 for additional comparison. Allegedly, early March weather in Washington DC was a motive for the rescheduling of this important date but having resided a few Januarys in our capital city I've never felt wintry January is much better than springlike March, temperature-wise at least.

As for newbie President Herbert Hoover, coming into office after a period of prosperity during the Roaring Twenties, a rainy March 4th must have seemed fine enough with number 30, Calvin Coolidge, by his side to welcome him into the presidential fold, soaked as he was by ceremony's end. Hoover took the Oath of Office on a family Bible turned to Proverbs 29:18...Where there is no vision the people perish... yet America's drive for imperialism lurked behind his words of peace.

Related: Roaring Twenties' Solar Eclipse and Why It Still Matters.

As it turned out, 1929 was a year of fanatical changes, disruptive events, and criminality under the influence of a violent Uranus-Pluto square yet Hoover's inauguration took place under the auspices of a 2 South Solar Eclipse (his presidency's Pre-Natal Eclipse Nov 12, 1928 @19Scorpio46, a difficult degree in the sign of investment--and within 6 days of the 1928 Election ; 2S next occurs @15Cap in 2019). The theme of 2 South: involvement in unusual groups and a feeling that a great deal may be gained through them (paraphrasing Brady's Predictive Astrology).

Years of social upheaval awaited populations across the globe, and in America transiting Neptune slowly floated toward its US natal degree (July 4, 1776, 22Virgo) where it dissolved (Neptune) employment opportunities (Virgo) for the masses (Neptune), a negative social condition dealt with in the 1930s by number 33, Franklin Roosevelt, and his 'New Deal' programs.

Later, Saturn entered its own sign of Capricorn and harshly squared Uranus which describes austere economical cutbacks and reversals as past ties were broken. Transformer Pluto continued its creep through Cancer, sign of home, family, traditional values, and of shrewd business activity. Fantasy-loving Neptune on the last (critical 29th) degree of partying Leo in the horoscope, below, shows the dregs at the bottom of Jazz Age gin and whiskey bottles while entertainers such as Josephine Baker continued dazzling French audiences. 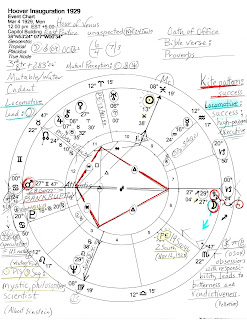 Well, that's all I'll type for now yet curiously enough, years ago I posted Hoover's Inauguration 1929 chart with brief notes (sans edits) on my Jude's Threshold site if you'd care to take a look. Enlarge the above chart for more details on the Inauguration and subsequent presidency of Herbert Hoover with the degree of BANKRUPTCY rising in tandem with warrior Mars and a depressive if ambitious pairing of Moon and Saturn as the Kite's tail which hints at success for ruling class but disadvantages and loss (Saturn) for We the People (Moon).

Perhaps the bankruptcy of our nation and people was the success the central banking cartel was aiming for.