Somehow as an astrologer this all seems engineered to tally with a global crash agenda made visible by 1993's three conjunctions of Uranus and Neptune at the POLITICAL POWER degree of 18 Capricorn, a degree which transiting Pluto is now within range of. Complete financial collapse is necessary for the power elite to institute a 'new world order', aka, a 'new world economic order' or 'global government'. The 'New Order of the Ages' that was created with the founding of America has grown stale according to transnational bankers and their operatives, some of whom work the levers of Washington DC from the vantage point of America's invisible (or, secret) government.

After all, transit Pluto to the 1993 Uranus-Neptune conjunction indicates potentials for: calamities and catastrophes (Ebertin) and/or, the big picture which must be followed, very little option to do otherwise (Tyl). So is the Brexit vote to leave the EU part of the 'big picture' or is it a case of doing 'otherwise'?

Perhaps the doomsayers who have asserted that 2016 is the year of a Great Global Crash were correct--unless markets and traders can calm themselves down (which I assert they can do if they will). Below is the horoscope of the EU set for November 1, 1993 00:01 CET Brussels, Belgium as found in Nicholas Campion's The Book of World Horoscopes. Outer planets in red are the Brexit transits of June 23, 2016 12:00 am CEDT Brussels, Belgium, the EU administrative capital.

And as you see, the EU is in the midst of a three-fer *Mars Return to 24Sco06 and its natal Pluto conjunction which denotes a time of karmic events (by which this Saturnian astrologer always means, reaping what was sown): 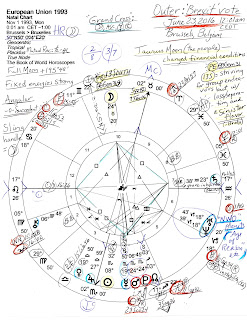 please enlarge to read notes; more information will be added later because right now, a certain 4-year-old is at my door!