Obviously the June New Moon gains significance due to its link to Summer Solstice and for people or institutions with mid-degrees of Mutable signs in their charts (Gemini-Sagittarius; Virgo-Pisces), projects, events, and relationships may be affected or influenced by the New Moon, particularly by conjunction or opposition.

My primary interest in this particular New Moon involves its Sabian Symbol, a word picture that provides additional information beyond the lunation's aspects to planets, angles, and such. Actually, I want to consider the 'karmic degree' (here, 14 Gemini) prior to the rounded-up degree (which would be 15 Gemini) and that degree's Illumination Point which is the opposite degree. Both the Marc Edmund Jones and the Dane Rudhyar versions of the symbols will be included. And obviously, a New Moon is the beginning of a new cycle of activity and suggests a time of planning or 'seeding' which will be fulfilled at the next Full Moon.

Naturally, we keep in mind that Airy Gemini is a mental sign of The Mind, the senses, messages, news and other forms of communication, disseminating information, trading and other forms of deal-making, negotiation, childhood, siblings, trickery, magic, dualism, and other Mercurial realms. Since you're here on SO'W, you may wish to relate this info to the tiresomely ongoing election process and our 2016 candidates.

(Rudhyar) 14 Gemini: "Bridging Physical Space and Social Distinctions, Two Men Communicate Telepathically...Keynote: The capacity to transcend the limitations of bodily existence" which speaks of "invisible nerve channels" and "vibratory resonance...It is a TECHNIQUE OF TRANSCENDENCE. It evidently can also bring confusion and many failures, as well as illusory claims and self-deceit."

(Jones) 14 Gemini: "A Conversation By Telepathy...Keyword: INTIMATION; positive expression = an exceptional capacity for achievement through the more organic relationships of personality in given and pertinent connections; negative expression = attempted accomplishment through innuendo or underhanded means."

(Rudhyar) "The Great Pyramid and the Sphinx...Keynote: The enduring power of occult knowledge and of its quasi-divine Custodians, 'Seed-men' of a previous cycle of existence....What is revealed is THE POWER Of SPIRITUAL ANCESTRY."

(Jones) 14 Sagittarius (Jones): "The Pyramids and the Sphinx...Keyword: CERTIFICATION; positive expression = effective practicality through a gift for bringing real imagination to everyday living; negative expression = ridiculous efforts to fill the shoes of giants.

To me the lunations of June 2016 spotlight bids for achievement that may involve such methods as occultism, telepathy, spiritual ancestry, innuendo, underhanded means, and ridiculous efforts by some who symbolically boast their tootsie sizes to be as large as those of America's spiritual ancestors--our Founders. Will such boasts be believed?

Now here is a list of countries that are said to be ruled by Gemini and Sagittarius though some are associated with a second or third sign as well:

You may know of more, of course, but notice that on this partial list, America is the only country ruled by both signs though naturally Cancer and Virgo must be added to the US column. For Cancer is where the June 20, 2016 Solstice Sun enters at one of the Cardinal Points of Global Manifestation, 00Cancer00, the Gate of Birth in arcane tradition.

And in Stars Over Washington tradition, the horoscope of Summer Solstice 2016 has been set for Washington DC, if you're curious. There is some discordancy here, however, for the Solstice's post title concerns endings and partings which may not jive well with entering the Gate of Birth.

Then there is our 1776 Mars-Uranus midpoint of revolution and potential violence which will be conjoined by the June 4th New Moon (14Gem53) hinting that a new cycle of freedom-fighting and/or plans for unusual achievement may be seeded during the dark of this New Moon with proof revealed around Summer Solstice 2016, either positively, negatively, or, a realistic mixture of both as the Solstice Full Moon provides the light of revelation. 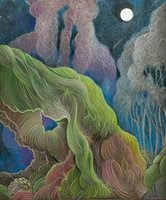