Using horoscopes set for November 8, 2016 at 8:00 am and 8:00 pm Washington DC, here is a print out of the day's midpoint pictures. Some may be activated at some point, others may not but here are their potentials. You'll notice that four of the pictures remain the same from 8 am to 8 pm, while 8:00 am (when polls open, if memory serves) shows two of its own and 8:00 pm(polls close) adds four more pictures to our Election Day tale: 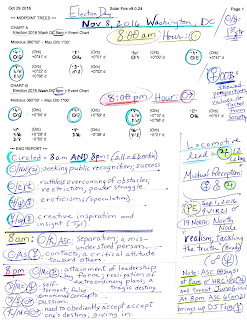 Yes, my scribbles are quite messy (as usual!) but hopefully you can make them out. Additional details concerning November 8th are on the right including the 8:00 am rising of Hillary Clinton's natal Jupiter @00Sagittarius in tandem with the transiting political asteroid Juno (aka, The Wife, and former First Lady). Then at 8:00 pm, Donald Trump's natal Mercury @8Cancer rises and as you know, Mercury is the (planet of voters, voting, ballots, decisions, etc)...yes, water is the strongest element, but Jupiter (the politician) in its own fiery sign is definitely weightier than little Mercury in Moon-ruled, watery Cancer (the trader, the salesman).

Circled and highlighted in parrot green (one of my Prismacolor oil drawing pencils) are the midpoint pictures in effect at both 8:00 am and 8:00 pm. Venus is out-of-bounds (OOBs) denoting detachment--of a power-elite lady? Of perspectives and/or values? of secret relationships? Transit Jupiter @12Libra (now gearing up for Mr. Trump's next Jupiter Return in December @17Libra) is lead planet in a Locomotive pattern of executive ability and success, plus, Venus and Jupiter are in Mutual Reception (on friendly terms--are Hillary and Donald secret pals?)

Also listed on the right is the Pre-Natal Solar Eclipse (PE) of both Election 2016 and Inauguration 2017 @9Virgo (Sept 1, 2016) with its realism, tackling the truth, seeing old situations for what they really are vibes (Brady). For me that has meant seeing Hillary Clinton as the neoliberal 'new world order'/global government candidate, and Mars-rising Donald Trump as the candidate who boasts loudly about disrupting said 'new world order' yet who can hardly be expected to do this without plenty of help in Washington. And who, shills and infiltrators that they are, will take on such a monumental task against a global syndicate that has everything already in place to keep itself in power and totally in control?

Well, there's always the chance that Mr. Trump has campaigned in order to give We the People the impression that someone speaks on our behalves and that he intends to fulfill his extraordinary promises to improve America once he's installed in the Oval Office!

Midpoint picture potentials from Reinhold Ebertin (though two are from Noel Tyl); any, all, or none of these midpoint pictures may express before, on, or after November 8th and are subject to transits, progressions, and solar arcs and of course comparisons with each candidate's natal and progressed planets will provide additional insights but such comparisons are beyond the scope of this post. jc