Oregon and South Carolina Horoscopes of The Great American Eclipse 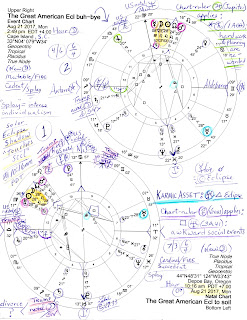 A Cosmic Blink Directed Toward America!

Here are two horoscopes for the 'first touch on US soil' at Depoe Bay, Oregon, and what I've labeled the "buh-bye" chart where the August 21, 2017 Total Solar Eclipse--aka, The Great American Eclipse--last touches US soil at Cape Island, South Carolina.

Perhaps you can enlarge the image and read a few notes?

There wasn't a lot of space to add Mr. Trump's natal Mars Rising in late Leo (with Regulus) so you won't see that listed around either chart but you will see that transit Saturn is again hitting Trump's natal Moon and South Node (divorce? his approval rating trends even lower?) which denotes a difficult time unless mitigated by the good planning and hard work that have taken place. Uranus in Aries marks the spot where friends, colleagues, and/or groups may provide karmic resources (from 7th house in Oregon, from 5th house in S.C.) so that evolutionary progress can be made.

And as you see, the chart-ruler in Oregon is Venus (24Can41 near Trump's natal Venus and Saturn and conjunct US natal Mercury Rx = good news?) which makes only one applying aspect: a square to Uranus (is someone blocking those karmic resources?) so that awkward social events take place; however, conditions and situations can turn pleasant before they end. US natal Sun (13Can19) sits atop the Oregon chart at Midheaven (MC) along with two fixed stars, Sirius (The Scorcher) and Canopus (The Plumb Line) joining in by degree.

In South Carolina, chart-ruler Jupiter holds sway @20Lib11 in 10th house (and still in progress of completing Mr. Trump's three-fer Jupiter Return to 17Lib27). As you see, Jupiter applies only once to an opportunistic sextile to Saturn, an aspect suggesting that hard work and careful planning will pay off and that limitations must be accepted in order to avoid over-extending ourselves. Of course, this is also a transiting sextile to Mr. Trump's natal Moon-SN conjunction and though his Saturnian SN involvement complicates matters, it hints that on some level, Donald Trump's dreams may come true--even with a Total Solar Eclipse hitting his natal Ascendant (physical body) and rising Mars in royal Leo! Plus, its last touch in S.C. puts US natal Neptune @22Vir25 at Midheaven (MC), the Goal Point of the chart. Neptune in Virgo identifies the many scientists and artists involved with this rare eclipse.

Now as you know, a Solar Eclipse in Leo spotlights the need to avoid Leo's more negative qualities such as pride, vainglory, bossiness, and pomposity. Hmmm...now what do you think are the chances of that? Especially when "fixed stars work through eclipses" (D. Ovason) so that the caution of Regulus may be the primary take-away here: success if revenge is avoided (if not, then all that has been gained will be lost). And that's another 'what are the chances?' when it comes to Donald Trump, America's avenger-in-chief.

Still, I'm typing this on April 3, 2017 when Trump 'scandals' litter the news cycle like Russian fleas on Chinese pups. But will his crises in office be sufficiently damaging to his administration by August so that the Solar Eclipse reveals a 'stepping down' or impeachment situation for an eclipsed Mr. Trump? Or will he, his policies, colleagues, and enablers eclipse America as they seem inclined to do?

Like yours truly, Stars Over Washington is a work in progress so here's my original post concerning The Great American Eclipse showing a horoscope set for McClellanville, S. C.