2018 Lunar and Solar Eclipses with Themes 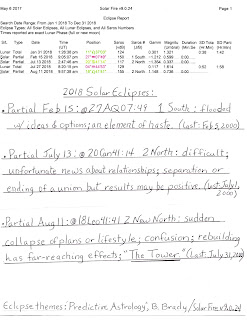 For better viewing, please enlarge the image of the 2018 list of Solar Eclipses (with themes) and Lunar Eclipses.

Occurring after what's being called The Great American Eclipse of August 2017 which 'splits' our nation from coast to coast, the 2018 Solar Eclipses fall into the 1 South, 2 (New) North, and 2 Old North Saros Series and, based on the Nodal cycle of 18.6 years, are repeats of the eclipses of year 2000 in the same signs (AQ, Cancer, Leo) but at different degrees. In addition, the year 2000 brought a fourth Solar Eclipse in the 2 South Series which manifested on Christmas Day @4Capricorn. This go-round, 2 South will repeat on January 6, 2019 @15Capricorn with themes of suddenly finding a new group to join and expecting great gains from such group involvement (Brady).

Since history tends to rhyme if not repeat, deeper insights into the 2018 Solar Eclipses may be attained by considering the historical events that occurred in the years that their initial eclipses began:

However, please note that "The Tower" Solar Eclipse of July 31, 2000 (which repeats on August 11, 2018 @18Leo41) was actually not the Prenatal Eclipse (PE) of the 9/11 attacks as we might expect. The PE of 9/11/01 was the 3 North which manifested prominently at Summer Solstice 2001 (June 21) upon the Cardinal World Point of 00Cancer, the stargate degree. And with glaring synchronicity as humanity entered the New Millennium, the winds of war and strife had already been let loose as described by the August 11, 1999 Solar Eclipse in the 1 North series, the 'Mother of All Eclipses' that Nostradamus warned us about so many moons ago with its Fixed Grand Cross of Oxen-Lion-Eagle-Angel (mid-degrees of Taurus-Leo-Scorpio-Aquarius) which may be found prophetically described in the Book of Revelation.

Related: Signs in the Sky: Opening the Stargate, an intriguing book by Adrian Gilbert.

And speaking of Mr. Trump, US Uranus, and wild cards, here's a related not-to-miss 10-minute video Anonymous: The Truth About Donald Trump for those who dare.