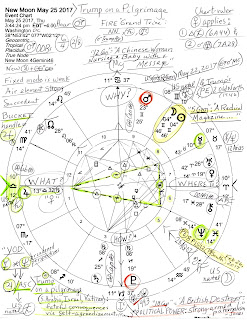 Please enlarge the chart for details that are not discussed in this text.

While the Cat's Away

As you know, Mr. Trump left the US on Friday May 19, 2017 for a 9-day tour overseas, or as this New Moon's 'YOD' pattern suggests he left "on a pilgrimage" via apex Jupiter Rx in Libra (his natal Jupiter @17Lib27 at Direct Station and the third conjunction in his three-fer Jupiter Return 2016/2017 due on August 4th) --see lower left for my notes; Jupiter apex in a YOD pattern (special task; crossroads; turning point; crisis if mishandled--the New Moon Jupiter as the handle of a Bucket describes an important direction of interest and links the two hemispheres of the chart). Since he's visiting Saudi Arabia (Islam) and dares to make a speech on their religion (God help us), checks out Israel in his superficial way, and, as US presidents do, bows to the Pope in the Vatican, a religious 'pilgrimage' seems a totally appropriate way to describe this perspective-broadening voyage.

Gemini is the sign of travel (especially air travel) and boundary-ignoring Jupiter does love to travel and expand his influence--here, in Airy Libra, sign of Diplomacy.

Plus, on another level, astrological Jupiter may also represent priests and gurus, so there's that. A bunch of bigwig Jupiterians face to face with shared goals in mind--what could possibly go wrong? Maybe Mr. Trump's natal Mercury-Neptune square might cause trouble for his square is echoed at the base of this YOD by a Mercury-Neptune sextile of opportunity. But for him (and thus for America) the beneficial influence of the sextile with its curiosity and communication skill can be hampered by Trump's square with its misconceptions, fantasies, and his personal version of the truth.

Actually, we've previously discussed the May 25th New Moon which perfects as the unpredictable Mr. Trump, political and diplomatic amateur, makes an appearance at the NATO Summit in Brussels, Belgium where he will expect to be the most famous person in the room.

Also see As Italy Prepares for the G7 Summit, It's Trump vs the Volcano and What to Expect from Trump's First Overseas Trip.

What a tour for his nibs! Full of so many chances for the bristling Mr. Trump's exhausting Uranian quirkiness and misspeaks that can so easily complicate an already complicated and sensitive world.

Astro-Note: The New Moon of May 25, 2017 perfects at 9:44 pm CEDT in Brussels, Belgium; ASC 6Sag58; MC 4Lib22; New Moon in 6th house; Saturn Rx rising in 1st house, and Bucket handle Jupiter Rx in the 10th house of Public Status and as chart-ruler, Jupiter has no application but stands alone; the difficult Mars-Saturn opposition lies across the 1/7 axis of Partnerships and Alliances in Brussels suggesting unstable stop-go, off-again-on-again level of energy.

For putting Donald Trump's political rise and parade of scandals in a broader context neither of us can do better than Trump Is the Symptom, Not the Disease by Chris Hedges.