The 'Cosmic Blinks' of Donald Trump and Trump Tower

Themes of his 2 Old North Prenatal Solar Eclipse (PE) are listed along with certain conjunctions to US natal planets, and other factors such as his birth on the day of a Total Lunar Eclipse @23Sag04, and his PE repeating on July 13, 2018 at a critical degree (20Cancer) which will emphasize his 2 Old North's basic themes beginning in early July 2018 and lead directly into the August 11, 2018 Solar Eclipse @19Leo (2 New North) with themes of 'sudden collapse of an existing structure' and 'lifestyle collapse' (B. Brady) - themes which hauntingly echo Tarot card number 16: The Tower: 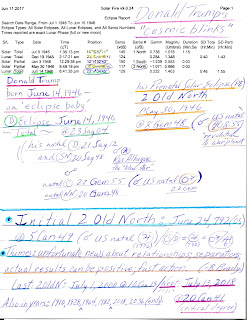 Eclipses of a Gilded Trump Tower

Perhaps you're a bit curious about Trump Tower. Construction began in 1979, a year of two solar eclipses: 1. Feb 26, 1979 @7Pisces in the 17 South Saros Series--'sudden success with group projects and/or relationships', and 2.August 22, 1979 @29Leo in the 18 North Series--'high stress level, a taxing of strength, large expenditures of effort, accidents or illness' (there were accidents and deaths during construction, if memory serves--it has 58 stories though the top floor is numbered '68'). As I type (June 11, 2017), note that we're currently under the influence of a 19 South Solar Eclipse which manifested on February 26, 2017 @8Pisces.

You'll also note that the 18 North eclipse @29Leo is at the same degree as the Total Great American Eclipse of August 21, 2017 we're all waiting to view which suggests resonance on a Leonine level (cautions against pride, vainglory, egotism, pomposity, bragging, 'showboating'), plus, a 29th degree suggests impatience of some sort--and conjoins the natal Ascendant of Donald Trump (29Leo) and royal Regulus (caution: success if revenge is avoided--otherwise, all gains will be taken away).

Now the PE of Trump Tower, which opened on November 30, 1983 (with a gilded flourish, no doubt) is the 3 North Series which manifested on June 11, 1983 @20Gemini (conjunct Mr. Trump's natal North Node (20Gem48) and snugged betwixt his natal Uranus (17Gem53) and natal Sun (22Gem55) in his 10th house of Public Status and Career. Plus, America's natal Mars 22Gemini is tucked in there somewhere.

3 North themes are of an 'over-excessive' series, news that transforms a situation and causes worry and obsession, undertaking large plans that work out successfully as long as one doesn't get carried away' (paraphrasing Predictive Astrology, B. Brady). 3 North last manifested on the day of Summer Solstice 2001 at Cardinal World Point 00Cancer and is the Prenatal Eclipse Series of the WTC ('Twin Towers') attacks of 9/11/01. A 3 North solar eclipse next occurs on July 2, 2019 (in time for America's birthday) @11Cancer.

NBC video: During a Campaign 2016 debate, Marco Rubio mentioned Trump's use of undocumented Polish workers during the construction of Trump Tower. Somewhat curiously, the video is dated February 26th.