For astrologers who've looked at the secondary progressions (SP) of Donald Trump there is little surprise that a deteriorating mental state and obsessions he can't let go of have been in the news ever since Trump announced his bid for the presidency and, more worryingly, since taking office on January 20, 2017. Astrologically this is due in large part to the progressed conjunction of his Mercury (mentality, thought processes, communications) and destroyer Pluto (obsession, fear, danger, morbidity, control, manipulation--especially via words, coping ability, Psychiatry) in Leo, the sign of ego, pride, and leadership. The tyranny of the weak is suggested here and perhaps you've noticed in Trump's tweets a disintegration (Pluto) of his thinking function and communication patterns (see video linked, below).

When Paired, Mercury-Pluto Doesn't Always Know What It's Talking About

That last urge belies Trump's Nationalism-Americanism themes yet a totalitarian Global Government is the 'Utopian dream'. An erratic Uranian, Mr. Trump is a Global Government agent of chaos no matter what he says or what he promised his gullible supporters! 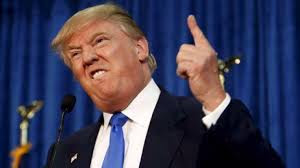 Now here is The Ring of Fire's Farron Cousins discussing the lifting of the gag rule (the 'Goldwater Rule') so that psychiatrists can openly discuss--and warn us--about the dangerous Donald Trump and his declining mental state:

For balance you may wish to see Slate's recent piece The Goldwater Rule Is Irrelevant by Susan Matthews.

A related video: Trump's Tweets Were Analyzed By Scientists, They Conclude That He Is Not....