July 10, 2017: A Stars Over Washington Reprint and the New Millennium Eclipse

Over the G20 weekend, I began to wonder who would want Donald Trump acting as leader of the 'free' world anyway? This pondering leaves me feeling out of sorts today concerning the political realm so the following is a mere reprint with a few minor edits of something I posted here years ago. A grumpy note from yours truly is added to the end if you can manage to read that far!

The Pre-Natal Eclipse Series of the New Millennium is the 2 South Saros Series which manifested on December 25, 2000 @4Cap15. The 2 South Series involves themes of becoming involved with unusual groups and feeling that one will gain a great deal through such involvement (paraphrasing Brady's Predictive Astrology.)

2 South next manifests on Jan 6, 2019 @15Capricorn25 and as you know, Saturn-ruled Capricorn is the sign of government, law, business, and other Saturnian realms.

In her book Your Prenatal Eclipse Rose Lineman describes a Solar Eclipse in Capricorn as advising a serious approach that stresses conservative, conscientious expression. In order to achieve karmic progress, we must overcome self-indulgence and master the self-discipline of the sign and its ruler, Saturn.

Ms. Lineman also states that an Eclipse in Capricorn should be regarded as an opportunity to gain substantial karmic advances but the price is hard work and dedication at the expense of personal pleasure and worldly prestige. People born under a Prenatal Eclipse in Capricorn tend to join business and professional organizations and show interest in political affairs.

Now you may find of interest the Sun Capricorn-Moon Pisces blend of the New Millennium especially since this chart is 'good for' a hundred years!

Sun Capricorn-Moon Pisces is an Earth-Water blend of two Yin elements and is one of the most nourishing and supportive combinations of all, mixing a capacity for sympathy toward others with practical considerations.

This blend possesses an innate wisdom to know what's important and what is not; practical and emotional needs are well-balanced in this blend. Both material and emotional security needs are wanted and are possible to achieve as long as one doesn't become a stick-in-the-mud and swamped by duty.

Yet a limited viewpoint is a caution and may interfere with goals, so we must watch for that.

This is a tough-tender humanitarian combo of energies--a scientist and poet, a practical dreamer. Personal courage results from self-reflection and moral precepts and there's a gift for quietly bringing order out of chaos, something we can all cheer for--with the exception of those who create chaos in order to commit and enforce morally repugnant social engineering against society for their own degraded purposes.

On the shadow side, there is a tendency to fear the unknown and carry the burdens of others even to the breaking point; negative thinking may often cause a loss of confidence.

This blend's Images for Integration: "A child builds a sandcastle of reinforced concrete...A wine collector uncorks a rare vintage to celebrate a success...'Bilbo' in Tolkien's Lord of the Rings...Bathers in a Landscape by Paul Cezanne...Elvis Presley's Blue Suede Shoes. (Sun Sign-Moon Sign by Charles & Suzi Harvey.) #

July 10, 2017: Well, those are the sorts of energies and expressions we longed for prior to the beginning of the New Millennium and until September 11, 2001. Needless to say, in 2017 many of us now have starker views of those who interrupt humankind's progress, and divert and squelch our longings for peace and positivity. So, as I used to post here earlier in the life of Stars Over Washington--the people who fancy themselves 'world leaders', in a word, suck. We all could have had a decent, safer world in this New Millennium but instead civilization is saddled with jokers, knaves, fools, and crooks running around ruining things for everybody while striving to protect their cushy little nests.

As if the dark lord they serve will care one little iota for them in the end! 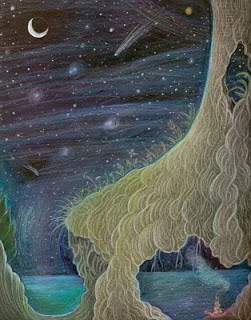