For the sake of comparison and because someone asked me nicely here are two 'DC Horoscopes', both 'coming soon' to Washington DC and thus to the rest of America: 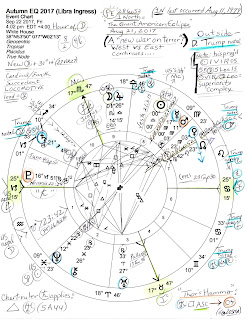 There are various reasons why this date in September is significant to Washington DC, some going back to its founding and before via certain founders' Freemasonry practices and rituals, Sacred Geometry, Venus worship, and other secret societies and 'higher' oaths taken. One obvious one for astrologers who use a natal horoscope of America set for July 4, 1776 at 5:09 pm is that this timing places the Aries Point on the IC and 00Libra00 at Midheaven (MC) where the Sun shines at Autumn Equinox each year. That the Venus-ruled sign of Libra is half of the Aries-Libra axis of war, diplomacy, partnership, and luxury has bearing as well. And as you see, 25Cap15 rises which brings along US natal Pluto Rx (27Cap33) with transit Pluto already risen and the transiting South Node of the Moon in 1st house, a difficult indicator of separation, unpopularity, and potential loss.

For chart details see my original post on Autumn Equinox 2017. 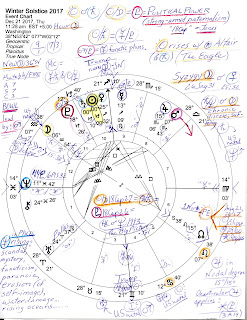 Before or around Winter Solstice each year the varmints and culprits of Congress have cleared out of the City on a Hill and left the place to its actual residents. Having been such a resident twice in my life, I can attest to the magical quality of a District of Columbia blanketed with snow and to the fact that even in the headquarters of worldly power in the US, the spiritual vibrations prevalent at this time of year cannot be completely squelched by DC's political corruption, cynicism, and downright unkindness. But politicians do sometimes seem to sport Grinch frowns on their mugs, don't they?

So let's forget all that! How about a higher view of Winter Solstice, one of the four times of the year that some say represent a spiritual path to awakening? Especially since, imho, America and the American people would definitely benefit from a major spiritual awakening right now! Oh but let's remember to hang on to the very important part where the country is founded on Religious Freedom, shall we?