Here is a DC Horoscope of the first eclipse of 2018, a Lunar Eclipse in Leo, plus, a brief review of the Solar and Lunar Eclipses of 2018 and links to further details: 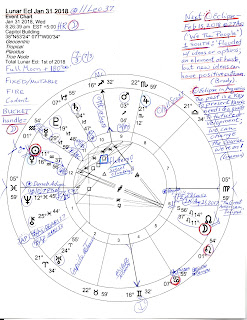 After the January 31st Lunar Eclipse in Leo comes its accompanying Solar Eclipse on February 15, 2018 @27Aquarius, what I've termed the 'We The People' Eclipse in the 1 South Saros Series because it conjoins US natal Moon in our late afternoon US natal chart/s of July 4, 1776.

Now as you know, a Lunar Eclipse that occurs prior to an accompanying Solar Eclipse suggest a period of decline and a passive response to the influences of the Solar Eclipse since it's a waning period of time from Full Moon to New Moon. With these two eclipses the Leo-Aquarius self-will polarity vs humanitarian efforts are concerns as 2018 begins--all eclipses are 'wild cards' of the Universe for they can disrupt like quirky planet Uranus, with their themes acting in similar fashion to a computer program 'running in the background' of society. This Leo-AQ influence spotlighted by 'cosmic blinks' in early 2018 may be a veiled reference to the self-interested, strong-willed Mr. Trump's rising Leo Mars opposing US natal Moon in humanitarian Aquarius, a passionate pairing that suggests potentials for antagonism, anger, mishaps, or even danger. Unfortunately, his 'finger on The Button' comes to mind along with the certainty of breakdowns of various sorts.

Then there's the Solar Eclipse of July 13, 2018 @21Cancer in the 2 Old North series (Mr. Trump's PE series), and the last 2018 Lunar Eclipse @5Aquarius on July 27th conjunct US natal South Node so perhaps more than the usual amount of unconscious material and secrets may be revealed from our nation's (or Donald Trump's) past and weaknesses inconveniently exposed.

The final eclipse of 2018 is a significant Solar Eclipse on August 11, 2018 @19Leo in the 2 New North Saros Series, aka, The Tower Eclipse which for obvious reasons may relate directly to Donald Trump and thus to America and its crumbling infrastructure, neglected for decades by Washington politicians who'd rather militarize the world and fund construction projects in foreign countries instead of spending our tax monies on our needs here at home.