January 19, 2018 UPDATE: just adding a link to the Lunar Eclipse in Leo which perfects near Trump's natal Pluto at 8:26 am est January 31st--the morning after Mr. Trump's SOTU Address.

On November 30, 2017, Speaker of the House Paul Ryan sent Mr. Trump the traditional invitation to address a Joint Session of Congress on January 30, 2018 which technically will be Mr. Trump's first State of the Union Address, or, SOTU.

Most SOTU Addresses have begun at 9:00 pm est in the House Chamber of the Capitol Building so if the unconventional Uranian Donald Trump follows suit (and for broadcasting purposes, why wouldn't the limelight hog?), we can set up a horoscope for January 30, 2018 9:00 pm est Capitol Hill and see what we see. Just such a horoscope is pictured here, plus, a dual chart of SOTUS 2015 and 2016 is shown below for the sake of comparison: 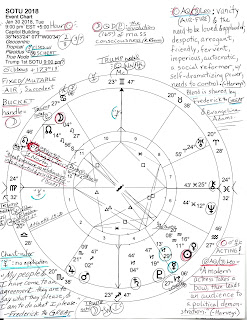 Hour of the Sun; chart-ruler Mercury (planet of speeches and SOTUs) makes no applying aspects and is at a critical 29th degree (Capricorn) in 5th house of Risk-Taking, Gambling, and Creative Pursuits. On this day, Mercury rises with a difficult fixed star, Scheat, which usually acts as a malefic so if I were you, I wouldn't expect a sunny SOTU from Mr. Trump whose Inaugural 2017 Address described a bleak America. Under one year of his administration, bleakness has certainly arrived if it wasn't here before.

Now the SOTU 2018 Sun AQ-Moon Leo blend is penned on the chart, upper right, and imho closely fits Mr. Trump's personality. This blend is shared by astrologer Evangeline Adams and by despot Frederick the Great (see a quote from Freddy, lower left, which quite describes the state of the union under Donald Trump.

As you see, the recent Solar Eclipse influences remain in force and for SOTU 2018 at 9:00 pm est conjoins the cusp of the 12th house of Politics, Karma, and Self-Undoing. This is the 1 North (aka, 'the Mother of all Eclipses') Total Eclipse of August 21, 2017 @29Leo conjunct royal Regulus and Donald Trump's natal Ascendant--The Great American Eclipse, so-called. Have you felt Mr. Trump and his minions eclipsing America yet? Why not? 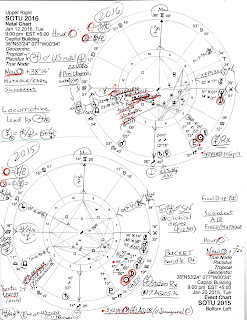