An Updated Horoscope of the US Presidency


Jan 8, 2018 Update: thanks to Kate Plumb it has come to my attention that the updated horoscope set for 1:00 pm, below, does not reflect an accurate time that George Washington took the Oath of Office so here I post yet another updated horoscope set for the hour the Mount Vernon website Timeline gives for our first presidential Oath--2:00 pm LMT, which gives a natal Horoscope of the US Presidency. Hopefully this will be the final updated chart!

As we would expect, an hour's change results in a few differences between the horoscopes. Exs: the Hour belongs to Jupiter now instead of crusty old Saturn. South Node of the Moon (the tail of the dragon) no longer swipes the MC from the 10th house side for it has crossed the MC into the 9th house. Mercury and Venus are posited now in the 8th house rather than the 9th and the MC is now in Gemini instead of later Taurus and so is ruled by Mercury, chart-ruler of the Ascendant (now 13Vir27, not 1Vir37). This removes the interception of Gemini and Sagittarius across the 4/10 axis. The 3/9 cusps are in Taurus-Scorpio rather than Aries-Libra.

I leave the 1:00 pm chart, below, for comparison's sake, and simply add the updated 2:00 pm chart to the post. Naturally, the festivities in NYC began earlier that morning for it was basically an all-day event which makes the 1:00 pm chart viable. (Follow the link, above to check out the full Timeline). Most of the 1:00 pm chart's details remain the same such as chart-ruler Mercury applying only once, a conjunction with Venus, powerful Pluto in Aquarius leading a Locomotive shape, and the 7 North Prenatal Solar Eclipse of the event (and the Presidency) is in the 3rd house of Communications rather than the roots-oriented 4th. You may spot other changes as well.

Now here's the 2:00 pm LMT Oath of Office horoscope of the US Presidency which is titled, Inauguration 1789 to distinguish it in my files from the 1:00 pm chart: 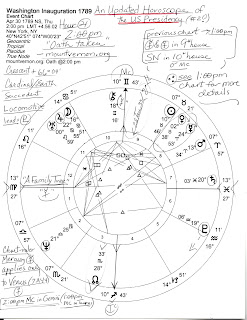 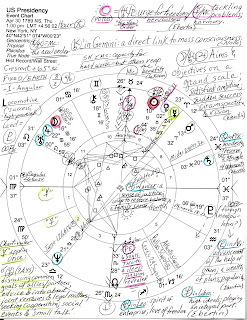 A number of years ago I had found '12:45 pm LMT' as the timing of the first inauguration of George Washington (April 30, 1789 Wall Street, NYC) and 'went with it' for setting up a horoscope of the US Presidency. This was the time George Washington and his escorts arrived for the ceremony and the source I had used is no longer with me for it was stored on a pc that crashed years ago.

So today I'm finally getting around to publishing an updated version set for 1:00 pm LMT which is closer to the time the Father of Our Country took the very first Oath of Office on a Masonic Lodge Bible and (nervously) began delivering his Inaugural Address.

Note that in the '12:45 pm' chart, 29Leo arose which received the cosmic blink of The Great American Eclipse of August 21, 2017 and which conjoined precisely the natal Ascendant of Mr. Trump. Please enlarge to read chart notes for little text concerning the Inauguration Horoscope of 1789 (the Natal Chart of the US Presidency) will be added here today. Yet we should note that President Washington's first natal planet to rise in this chart is Jupiter Rx @8Lib37 followed by his natal Pluto Rx @17Lib41, the natal degree of Donald Trump's 2nd house Jupiter Stationary Direct. (Jupiter-Pluto = plutocrats and large-scale projects.)

Additionally, for those who find value in Secondary Progressions for 'updating' a horoscope concerning its natal promise, the US Presidency is currently laboring within a Balsamic Lunar Phase (the 'dark of the moon' = endings, partings, separations) which, based on the horoscope you see here, began on October 7, 2015 with SP Moon @6Sco41. The US Presidency will experience the symbolic 'new beginnings' of an SP New Moon @25Sag16 on April 11, 2019 which was perhaps cosmically foreshadowed by the December 18, 2017 New Moon @26Sag31, a time of seeding, that was fulfilled by the New Year's Day Full Moon of January 1, 2018 @11Can37--falling as it did between US natal Jupiter (5:56) and Sun (13:19).

And although the natal horoscope of 1789, as you see, shows a Locomotive shape of the 'high-powered executive' demanding success (POTUS!) with out-of-bounds ('OOBs') Pluto as the engine (see chart notes on the 6th house Pluto in Aquarius), the SP New Moon horoscope of April 2019 shows Uranus Rx @9Leo06--conjunct Mr. Trump's natal Pluto 10:02--in SP 5th house of Speculation and Gambling--the maverick who now quirkily leads our national Locomotive to and fro for his own and his family's personal gain. And of course, Donald Trump's natal 10th house Uranus in Gemini is his oriental planet which guides his odd behavior via chaos and eccentricity as he disrupts America's traditional leadership roles domestically and across the globe.

Thus the rebellious blend of Uranus with Pluto suggests reforms and a subsequent 'new order' so apparently it is time for one to supplant the 'new world order' which began in 1776 with the rise of America as the New Atlantis. And as you see, the midpoint of the old order vs new order pair of Saturn and Uranus sits atop the Goal Point (MC) of the US Presidency's natal horoscope and forms a midpoint picture that Noel Tyl gives as: break away from the old, and/or, loss of self to the grip of controls - in 1776. Yet nowadays, Mr. Trump continues in his attempts to unravel the US Presidency, the US Constitution, our traditional checks and balances, the typical roles of the three branches of government, the US Justice System, our rights and freedoms, the National Treasury, our foreign alliances, and more. Yes, with Trump, US reliability is tossed out the White House window! And like abusers everywhere, his tactic is an attempt to separate our nation from all who could aid us against his overbearing authority! For the proposed border wall, a money pit, would shut us in more than shut others out.

But as I've noted in a previous post, perhaps we'll know more of what's in store for Mr. Trump and his chaotic leadership style around the time (or up to two weeks prior) that his Prenatal Solar Eclipse Series repeats on July 13, 2018 @21Cancer in the 2 Old North Series with its difficult themes of 'unfortunate news' and 'endings and partings' (Brady). For with a majority of Americans and others heartily unimpressed by Trump's 'styling' of the US Presidency, perhaps his 2 Old North PE be the trumpet call of a sad good-bye.

On the cuss'ed topic of Mr. Trump's 2 Old North PE, let's close with this from a previous post:

'{Manifesting} on July 13, 2018 {is} a Solar Eclipse @21Cancer in the 2 Old North series which is the Prenatal Eclipse (PE) series of quixotic Donald J. Trump, swamp-drainer extraordinaire (not!) His 2 Old North PE occurred on June May 30, 1946 @8Gemini conjunct US natal Uranus which suggest potentials for revolution, resistance, protests, unrest of the people due to his actions and rhetoric, upsets in the nation, a break for freedom, and/or violence.' Will the break for freedom be his own escape from the White House? A gal can dream, can't she?

Related Posts include: In Tribute to Master Mason George Washington and Coming Soon! In February 2018 is what I'm calling the 'We The People' Solar Eclipse hitting by degree the US natal Moon.