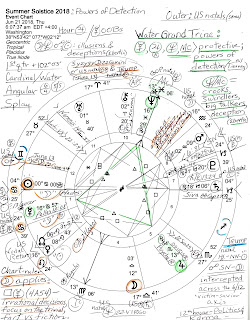 Image: Summer Solstice 2018 June 21, 2018 6:07:37 am edt Washington DC; Hour of Jupiter Rx @13Sco54 in 5th house; Ascendant 4Can25 with US natal Venus, Jupiter, and Sun rising; Chart-ruler Moon @12Lib03 in 4th house applying to square Solstice Mercury @16Can57 (4A54) and rising in 1st house (see chart, bottom left). Thinking-planning planet of youth and communications, Mercury, in Moon-ruled Cancer squares the Moon which denotes irrational, emotionally based decisions, a focus on trivial matters and small details (perhaps for the sake of diversion), and a continuation of fact vs fiction issues that are particularly brought out these days by Donald Trump's natal Mercury-Neptune square of misconceptions, fantasies, falsehoods, and "fake" (Neptune) "news" (Mercury); significantly Trump's natal Mercury @8Cancer51 is first to rise of his natal planets though tr Saturn has been opposing (challenging) his n Mercury off and on this year while squaring his natal Neptune in Libra as Saturn does here. Does tr Saturn in Capricorn, Mr Just-the-Facts-Please, represent Special Counsel Robert Mueller or the Senate investigation of Trump? What do you think?

Now both Mercury and Luna prominent in this chart suggest that fluctuations and changes in conditions are on America's Summer 2018 menu with the Moon ruling 1st and 2nd hou$es, and Mercury ruling the 4th house of Home and Homeland--yet Mercury is out-of-bounds of the earthly plane and off on his or her own, isolated perhaps. Also represented by mundane Mercury are reporters, bloggers, pundits, traders, deal makers, consumers, educators, students, motorists, magicians, and tricksters.

As you see, the 12th house of Politics, Karma, Self-Undoing, Large Institutions, Secret Enemies, and Backroom or Hidden Deals contains the sign of Gemini where Mr. Trump's natal Uranus-NN-Sun trio are placed; opposite in 6th house of Military-Police-Civil-Service-and-Daily-Life, Sagittarius is contained via interception which to me denotes Gem-Sag (Mercury-Jupiter) matters which must be dealt with. Now as you know, this axis spotlights Trump's Sun-NN opposite Moon-SN polarity of relationships and ego/career vs emotions/family. Of course, Trump's guiding 10th house planet, eccentric Uranus in chatty Gemini, is involved as well with its preference for leading by chaos, disruption, shock, and revolt. Here, tr Uranus, still finding his (unstable) footing in Venus-ruled money sign Taurus is in 11th house of Groups and Associations and spotlighting activities such as speculation, risk-taking, and taking premature actions that lead to failure (Ebertin). Links between evaluating Venus and disruptive Uranus tend toward extravagance, erratic spending, and/or break-ups in relationships or alliances.

Note that transit Mars, here @9AQ02 in the corporate 8th house, will turn Rx @9AQ13 on June 26, 2018, and Jupiter's Direct Station occurs July 10 @13Sco20 so both are on their stationing degrees in the Summer Solstice 2018 chart. Of interest may be their rounded-up Sabian Symbols: '10AQ" = "A Man Who Had For a Time Become the Embodiment of a Popular Ideal Is Made to Realize That As a Person He Is Not This Ideal" (Keynote: The need to deal with human beings as persons rather than as screens upon which one projects one's dream and ideal) and '14Sco' = "Telephone Linemen at Work Installing New Connections" (Keynote: the need to establish new channels of communications - Rudhyar; (as in diplomacy? surveillance? jc).

So with Summer Solstice 2018 taking place under the auspices of the February 15, 2018 Solar Eclipse (1 South), we continue to be 'flooded with ideas and options' (Brady) though hopefully summer floods are not in the mix. Plus, the karmic 12th house with its Gemini interception contains, hides, forces matters of the previous lunation ('Syzygy Moon'), the New Moon of June 13 @22Gem44 which by degree and darkened light veils America's natal Mars (22Gemini) and activates our tiresome Mars-Neptune square of misdirected motivations and confused or deceptive actions (the fog of war)--and also happens to veil the natal Sun of Mr. Trump (22Gemini) who at the moment seems to be 'calling the shots' (Sun) with little or no input or advice from others.

Marked in green is a Water Grand Trine between Mercury, Jupiter Rx, and the Neptune-MC conjunction (see next paragraph) which provides a calming measure of protection, sensitivity, and good powers of detection though some may act more lazily than they should under its easy influences. Apparently, someone is under protection which may be at work in the background!

Now as always, there are several other cosmic and political factors located in the Summer Solstice 2018 Horoscope but for the sake of brevity I shall only mention one more which perhaps should have been mentioned first and that's Neptune Rx in its own sign of shady, mystical Pisces--at Midheaven (World Stage; Career; The Goal). To me this denotes that America's Neptunian problems not only continue (with the Republican Party being in the midst of its first-ever Neptune Return--last conjunction to natal degree at the end of December 2018), but our national instability and undermining difficulties, falsehoods, and corruption are completely visible to the entire world (MC) along with the fear, paranoia, uncertainty, and confusion that current US leadership suggests. Plus, healing-wounding Chiron @2Ari20 in 10th house is also visible and is apex of the Sun (leader) opposition to law-abiding Saturn Rx @6Cap18, planet of karma and strong in its own sign. This seems to describe ego-bruising of the Trump-Establishment stand-off that is ongoing as I type in April but it remains to be seen how far along such matters will be by June 21, 2018.

But however and whenever the 'RussiaGate' probe ends and whatever its outcome, here we see a picture of karma at work for even the glorious and proud Mr. Trump must at some point in his life reap what he's previously sown--as must the United States of America.

For those who would dare a peek ahead at future cosmic conditions in Washington DC and thus in America, try Horoscopes: Spring Equinox and Summer Solstice 2019