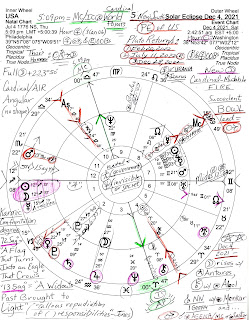 Image: Solar Eclipse @12Sag22 December 4, 2021 surrounding US Natal Horoscope July 4, 1776 5:09 pm LMT Philadelphia, Pennsylvania. This Solar Eclipse falls into the 5 New South Saros Series with themes of benefits and peak experiences and its initial manifestation perfected on June 15, 1787 @24Gem20, near the New Moon degree (25:07) of the Uranian Mr. Trump's 'escalator announcement' of his presidential bid in June 2015. It is also the degree of the 1781 discovery of planet Uranus (24Gem27). Will the senior Mr. Trump still be around in 2021 or 2022? We'll see for it may depend on how many cheeseburgers and greasy chicken thighs he scarfs down between now and then (I'm not wishin' I'm just sayin').

Now the US natal chart here is the one I usually tend to favor because it places Cardinal World Points on the MC and IC angles of the chart along with two applicable Sabian Symbols. '1 Aries' = IC, the Foundation of the Matter) = "A Woman Rises Out of Water, a Seal Is Embracing Her" (Jones) which to me sounds like the New Atlantis as America, a 'her', across the sea from England--and America's Great Seal intended to certify official documents and based on Weishaupt's Illuminati Seal design of May 1, 1776. This, plus the natal horoscope's Ascendant degree/s ('12Sag' and '13 Sag'--see chart, lower left) suggests our nation on various levels--one of which is its Freemasonic birth of an idea/ideal that is the Founders' 'New Atlantis' in which men are capable of enlightened self-government for as Thomas Jefferson asserted,

"I have no fear that the result of our experiment will be that men may be trusted to govern themselves." (TJ July 2, 1787.) Do you think that remains the case in 2018 much less by 2021/22? If not, it's primarily due to infiltrators that have infested our country for decades now and their devilish, undermining machinations which are really paying off as they planned long ago. (See my 2005 description of Stars Over Washington under the title, above!)

Note: Now I'm using the 5 New South Eclipse as the PE of America's Pluto Return phase in general, plus, its degree conjoins our nation's July 4, 1776 natal Ascendant in Sagittarius (late afternoon charts). However, two other Solar Eclipses perfect in year 2022 with themes that are notably plutonic and I intend to cover them in a different post as soon as I can get to it. Check back if you're curious, or subscribe if you wish.

And so as creepy Pluto in Capricorn (planet of the Underworld, secret manipulators, hidden wealth, sneaky stealth, death, sex, research and investigation, transformation and regeneration) continues plodding toward his natal degree (27Cap33) and reprises his opposition to US natal Mercury (24Can11: '25Cancer' = "A Man Wrapped in an Invisible Mantle of Power") off and on along the way, we can see in the above Eclipse chart some of the general cosmic background influences upon the first-time-ever phase of our exact Pluto Return/s--three in number. Our Pluto Return phase will activate America's surveillance pair of planets ('total awareness' aka, Big Brother) with the duo's (continued!) propensity toward secrets, gathering of information (intelligence activities), top secret communications, security clearances, self-destructive impulses in business operations, political talk of abrupt changes and reforms, breakdowns in road networks, paranoia about secrets or scandals and the leaking or disclosure of them, ruthless behavior, obsessions, eroticism, news about space exploration, orbital weapons, and/or toxins, and the need to control other people (Munkasey) when it's actually The Manipulators who need controlling.