The Prenatal Eclipse of the MLK Assassination 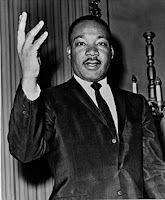 The tragic and cruel Assassination of Dr. Martin Luther King, Jr on April 4, 1968 at the Lorraine Motel in Memphis, Tennessee 'killed the man but not The Dream'. Here is a link to his I Have a Dream speech delivered on August 28, 1963 during the March on Washington For Jobs and Freedom--for Civil and Economic Rights of African-Americans. Obviously, the power elite of DC and elsewhere did not appreciate Dr. King's rising popularity and that of his causes which threatened their leadership and promised to elevate opposition to the Vietnam War and combine it with the Civil Rights Movement.

Resident of the Oval Office in April 1968 (until Nixon was elected) was Lyndon Baines Johnson who some assert was behind the JFK assassination and if so, LBJ would have had no compunction about ordering the death of MLK (and RFK), would he? Now as an American, I loathe mentioning such possibilities but there it is. Besides, most everyone knows that Lyndon Johnson was a ruthless politician who vehemently hated the Kennedys. And of course, Robert Kennedy was also shot in 1968 on June 5th, and died the next day. Related video: History is proving that LBJ killed Kennedy.

6 North: the Prenatal Solar Eclipse of the MLK and RFK Assassinations

As you know, 'cosmic blinks'--eclipses--are known as 'wild cards' of the Universe for they tend to express erratic and disruptive Uranian energies in table-turning, change-of-direction ways. The operative Solar Eclipse which manifested on March 28, 1968 @8Aries can be credited with these murderous political crimes via eclipse themes which may not seem particularly ruthless until we consider the real world events that took place under 6 North's background influence, plus, the political vibes of the era which, then as now, do not include the sharing of power and control. And in 1968, the last vibes of the rebellious, daring Uranus-Pluto conjunction/s of the mid-1960s remained in force though waning. Also Uranus-Pluto is the 'collapse of the old order, construction of the new' pair of generational planets (Ebertin) and 'success at any cost' implications included the removal of all obstacles to that success. We may also wish to note that the 1968 eclipse @8Aries conjoined and thus triggered the natal Sun-Mars midpoint of Dr. King while opposing his difficult Saturn-Pluto midpoint in Libra. Sun-Mars = vitality, vigor, activity; Saturn-Pluto = cruelty and violence.

Themes of 6 North: relationship to authority figures, the need to take control and responsibility, accepting commitments due to another person's illness or unreliability (Brady). So if we extend themes of 'illness' and 'unreliability' to matters of death and the need to 'take control' of the US (or, remove control from Reverend King and a potential President Robert Kennedy) someone chose to give the American people the assassinations of MLK and RFK.

A Solar Eclipse in the 6 North Saros Series last manifested on April 19, 2004 @30Aries and will next occur on April 30, 2022 @10Taurus. The initial 6 North eclipse perfected on May 15, 850 (OS) @27Tau55. The only Great Conjunction to perfect in 2022 is between the bubbly duo of speculation and schemes Jupiter and Neptune on April 12, 2022 @23Pis59--Pisces, the sign ruled by boundary-breaking Jupiter and co-ruled by nebulous, undermining, eroding Neptune. Which reminds me--in April 1968, transit Neptune conjoined US natal Pluto in Capricorn, a planetary timer of erosion of power and the rise of a public figure with a religious message.

You may also wish to to see Dr. King's natal horoscope (January 15, 1929 12:00 pm cst Atlanta, Georgia RR: A) and his natal Chiron in Taurus, sign of the neck and the location of the bullet that cruelly pierced him.