July and August 2018 Karma Returns: first on July 12th a Solar Eclipse perfects @20Can41 in the same Prenatal Eclipse (PE) Saros Series (2 Old North) as that of Donald Trump - everyone feels it - these are critical times. Fixed star Castor is eclipsed which activates the star's potential expressions depending upon conditions and the individual's planets and motives.

Then it's a secrets-revealing Lunar Eclipse @4AQ44 conjunct US natal South Node--more karma for the reaping as scandals continue surprising.

Finally, August arrives with The Tower Solar Eclipse @19Leo in the 2 New North series which happens to be the Prenatal Eclipse of the 2018 Midterms. The US Election System collapsing? Voter suppression and other fraudulent schemes and foreign hacking negate election results? A financial crash? Trump's political/financial House of Cards falls into rubble and dust? None of the above? One clue: the last manifestation of 2 New North occurred on July 31, 2000 @8Leo so we'll see if New Millennium issues surface again from that era with new solutions possible. Also note that the 2000 eclipse @8Leo hit the natal Mercuries of Senator John McCain and the Republican Party, and if memory serves, the August 2018 repetition of 2 New North is a cosmic heads-up for karmic progress to be made because it is the PE of Sarah Huckabee Sanders, Trey Gowdy, Dennis Kucinich, and Courtney Love.

And speaking of karma returning and history rhyming, have you noticed that the Summer 2018 Eclipses are repeats from those of 1928?

Okay, here's a new experiment: I attempted to create The Tower 2018 Slideshow with a bit of cosmic art, a solar and a lunar eclipse horoscope, and a little mysticism tossed in to honor George wearing his best Apron: 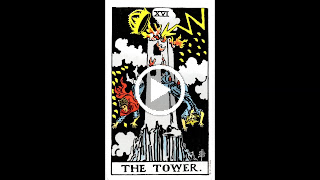