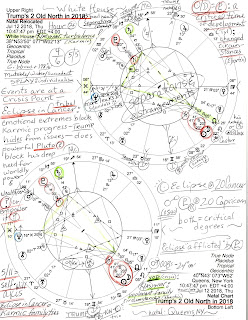 On July 12, 2018, a Solar Eclipse perfects in Donald Trump's personal 2 Old North Saros Series, this time @20Cancer41 (in 1946, @9Gemini) conjunct one of the dark-light twin stars, Castor. Here is a dual image of the July 12, 2018 2 Old North Solar Eclipse--one horoscope set for Trump's birth location of Queens, NY (lower right), the other chart set for the White House in Washington DC. Some differences will be noted especially with Angles and cusps though no planets change houses from one location to the other. Those who are curious about the differences in Sabian Symbols may choose to look them up and I will add Carelli's Degrees, below, to describe the critical-degreed eclipse @20Cancer (Carelli doesn't round up) and the planet opposing the eclipse, Pluto @20Cap00.

Most of my notes are squished on to the charts but one must read both to glean all the notes which are shared between the images--not enough space to do otherwise. Surprisingly, the Hour of the eclipse in DC is Jupiter but in Queens it's time for Mars types of activity (probably with psychological indications). This I have seldom if ever seen between such close locality charts since the timing of the eclipse (here, 10:47:47 pm edt) is the same in both places. Anyway, the notes hopefully are legible if you can enlarge the image as you wish. Note that fixed stars work through eclipses and their potentials are stimulated by them (Ovason) which in the case of this particular solar eclipse, the influences of Castor, and as noted below, its twin Pollux, are spotlighted by the July 12, 2018 'cosmic blink'. This solar-lunar event also emphasizes the dark-light qualities and polarity of the twin stars and suggests issues involving awareness, relationships, and culmination, or endings.

Themes of the Solar Eclipse

2 Old North themes denote potentials for separations and unfortunate news although taking fast action may somewhat improve matters (Brady). More info may be found via the eclipse's conjunction with starry Castor, a creative star but also one with difficult potentials such as sudden fame or loss, murder, crippling of limbs, mental illness (A. Louis); a tendency toward storytelling that blends evil with good (Castor plus Pollux = dark vs light, as noted); violence (Robson); and/or, mischief (Rigor). For Castor Ebertin and Hoffmann spotlight the star's changeable Mercurial nature mixed with Jupiter's expansive influence.

As for Pollux ('the wicked boy') sources seem to agree on its Martian qualities and reputed tendencies toward brutality, cruelty, violence, and tyranny--if negatively linked in the chart. I mention Pollux here because Trump's natal Saturn ('the old devil') @23Cancer conjoins Pollux, a combination which may possibly denote tragic endings unless the energies are responsibly handled. Also to Pollux we must add potentials for: the danger of disgrace, the occult, murder, cruelty, rape, and/or danger from women, large animals, and poisons (A. Louis).

Eclipses: What Are They Good For?

As you see, Trump's 2 Old North Solar Eclipse @20Cancer is opposed and challenged by powerful manipulator and saboteur Pluto @20Capricorn--and as you know, Pluto in Capricorn signifies The Dictator (Ebertin). The critical midpoint picture formed by Sun-Moon-Pluto is penned on the chart, upper right, and highlighted in red. The 5/11 axis of Self-Will is in the spotlight (in both locations) and also suggests Trump's offspring, family ties, and karmic relationships. A Solar Eclipse in Moon-ruled Cancer, sign of tribalism and patriotism, implies that emotional extremes will block karmic progress (R. Lineman). This is penned on the left side of chart and highlighted in red. Also note that the self-protective nature of crabby, subjective Cancer indicates a man (Trump) in hiding or scuttling away from issues, and I wonder if opposing Pluto will block his deep need for worldly power and wealth--or empower it. Either way, events and conditions have reached a critical point of development while past actions are haunting Mr. Trump with their usual 'reap what's been sown' demands.

In addition, the White House chart reveals a YOD pattern of crisis/turning point implications between Saturn-ASC = North Node: unpleasant family circumstances; add the Mars-South Node conjunction of the loner on the separative end of the Nodal axis and we have: obstinacy; self-will; separation, and/or bereavement (Ebertin). Of course, this YOD pattern may or may not become activated at all, or its potentials may be delayed with restrictive Saturn involved.

Plus, law-abiding Saturn Rx--strong in its own sign of governmental, legal, and business-oriented Capricorn--isn't boding well in the 10th house of Career and Public Reputation during this period. And as we've previously discussed, 'The Tower' Solar Eclipse of 'collapsing lifestyles and plans' approaches on August 11, 2018 @18Leo41 in the 2 New North series. This karmic lunation (with an unaspected Pluto) could trigger major developments for tower-builder Trump and its effects could be felt as soon as two weeks prior to August 11th, around the time of the July 27, 2018 Lunar Eclipse @5Aquarius which conjoins US natal South Node, a Saturnian point of separation, karma, talents--or, dependence upon what worked in the past but which no longer solves the issue. In a word, neurosis.

Well, I could blab on concerning such topics but obviously from current events we know that Mr. Trump isn't having as good a time in the White House as he'd lazily expected--although his collapsing of America seems to be on schedule. Yet the Mueller investigation into the Trump campaign and that of Trump's personal lawyer Michael Cohen must keep them both up at night but let's not go there in this post. After all, we should know more details soon since eclipses occurring in any series frequently bring pending issues to a boil, disrupt events or conditions, indicate a new direction, bring shocks, and/or uncover secrets while revealing or triggering scandals. Plus, Neptune rising in first house, as you see, denotes more scandals, along with potentials for tears shed, drowning or leaks, and collective issues out of control and on the rise for eclipses are Uranian 'wild cards of the Universe' which are often termed, cosmic blinks. And now in closing here are...

The following quotes are excerpted for the sake of brevity and are partial yet no meaning has been seriously affected:

Eclipse "20Cancer" = "A watchdog slumbering at the entrance of an old palace"..."Masters is what dogs have" (a popular Italian proverb); "a life of idleness...when kicked he will whine like a coward and will think nothing of kissing the hands that enslave him...nothing weighs so heavily upon his shoulders than personal responsibility...a lustful and lazy being...A thorough craven, he will boast of his master's valiant deeds...he will brag of his master's wealth...A bastard (or a degenerate) scion of a very old lineage, he would rather die that forget it...As long as mankind stays what it is, policemen, customs officers, sextons, career soldiers, jail wardens, harlots, all are necessary evils. The frontier needs watchdogs, justice needs bloodhounds, and the male needs the female."

Pluto "20Capricorn" = "A monkey and a mirror"..."A very versatile but altogether unoriginal mind; mimetic faculties may come to light as a merely perfunctory assimilation of foreign doctrines...pantomime and burlesque...Adaptation comes {} to such a character and, unfortunately, to such a conscience as a matter of course...yet (he) remains an insufferable crank...Physical vanity will be bottomless...and (he) may turn into something of a fop or a Beau Brummel, as the case may be."

With his overly pampered and sprayed 1980s hairstyle, spray tan of orange-ish hue, and the freakishly long red tie?