Please note that the following post with dual horoscopes is offered primarily for timing purposes of current and soon to transpire events yet is not to be taken personally by readers nor is it intended to suggest an exact moment for earthly events to occur, for the Infinite Cosmos has its own timing processes going on, thanks very much! And as you know, there is a time for every purpose under heaven and As Above, So Below will perfect at the moment our Creator is good and ready--even without horoscopes being calculated and studied, and without arrogant men thinking that they can hurry things along for their own sinister reasons.

Even so, perhaps we might consider a synchronicity such as this...

On September 5, 2018 at 5:59 pm edt Washington DC, the Secondary Progressed (SP) Moon of Donald Trump reaches 18Leo41:42 and precisely conjoins the current Solar Eclipse degree in the 2 New North Saros Series which perfected on August 11, 2018 @18Leo41:42, aka, 'The Tower' Solar Eclipse for its theme of 'collapse of structures, lifestyles, and/or plans and the rebuilding that begins once the dust settles' (paraphrasing Brady's Predictive Astrology).

Now as you know, SP Moons are one of the handiest timing devices in Astrology along with transits and other techniques, and although this conjunction may not amount to much in the 'real world' of Mr. Trump (who am I kidding 'real', right?) I thought you might like to view both horoscopes if you haven't: upper right = Trump's SP Moon @18Leo41:42 on September 5, 2018 along with another gander at the August 11, 2018 Solar Eclipse @18Leo41:42 (lower left); please enlarge the image for more chart details for I'd like to keep this post brief: 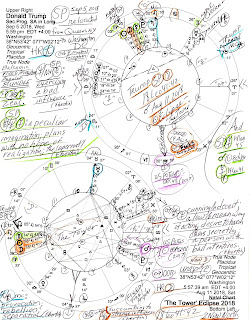 All Suns and Moons are color-coded orange, both Mercuries @14Leo+ (!) are green, in lavender are Eclipse Mars @00AQ19 Rx conjunct US POTUS Sun (@00AQ48 in 2017 and for four years) and his SP IC (Endings). As you see, Eclipse Uranus @2Tau33 Rx conjoins Eclipse MC (changes, reforms, upsets, or -?-) while Trump's SP Saturn @2Leo53 is in process of crossing his SP MC, a potential hint of a fall from grace, a major relocation, being held to account, or taking on more responsibility.

Note: for more information, a consideration of the Sabian or other Symbols for the various degrees of planets, points, angles, house cusps, plus, the eclipse and other lunation degrees would provide depth. Of course, symbols for Mr. Trump's natal degrees are notable as well and a few of his natal planets are penned around the charts. Also his upcoming SP New Moon @3Vir00:12 perfects on September 16, 2019 as noted in a previous post or two--here conjunct his SP 11th cusp. And note that his current SP 'action' is primarily playing out in the SP 12th house of Politics, Karma, and Back Room Deals, in the Public Status 10th house of Career, and in the corporate and occult 8th house. Yes, a comparison of SP planets with natal houses would be preferable but it would be beyond the scope of this 'brief' post.

Lower left you see a midpoint picture involving both MCs which forms symbolically when we ignore the signs and look to the planets and angles: Saturn-Uranus = MC: provocation; rebellion; separation (Ebertin). The prominent midpoint picture in the Eclipse chart is listed (Mars-Uranus = Neptune) while three SP midpoint pictures for Trump are listed (Moon-Pluto = Mercury; Uranus-Neptune = Mercury; Neptune-NN = Pluto). And note that SP Pluto is no longer unaspected as natal Pluto (10Leo02) is in Mr. Trump's natal chart but Eclipse Pluto is unaspected suggesting a powerful isolationist in an 'ivory tower' who is 'overshadowed by shadows' (Tierney). So unaspected Pluto by transit is, in effect, a 'natal echo' for Mr. Trump as is the transiting Mars-Saturn = Pluto trio of fury, rage, brutality, and death of many people (Ebertin).

Then perhaps it's the ivory tower called the White House with the mob-tied plutonian despot crouching within that is pictured here--and maybe towers with 'TRUMP' plastered on them are not the only structures due for a fall.