Today just a quick posting of the Solar Return 2019 Horoscope of the 2017 Inauguration of Donald Trump (January 20, 2017 noon est Capitol Building Washington DC) with a few chart notes to follow: 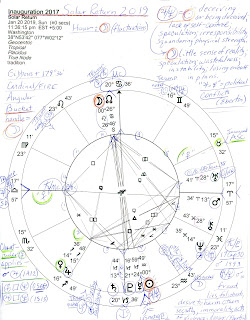 The POTUS Sun (or, Oath of Office Sun) returns to its 2017 degree of 00AQ49 on January 20, 2019 at 11:36:15 pm est Washington DC during an Hour of the Moon (fluctuations, changes, publicity) with Moon in 10th house of Career and Public Status and the North Node of the Moon @26Can46 denoting public contacts and future direction. Opposite in 4th house is the POTUS Sun @00AQ49 in what is nearly a Full Moon which suggests awareness, fulfillment, or some sort of culmination for "something has gone full circle and a completion is at hand" (C. Teal).

Yet good fortune for the White House is also suggested by a Full Moon in a Solar Return chart. A Solar Return Moon in Leo denotes potentials for increased vitality, a possible reward or honor, coming under the spotlight (especially in the visible 10th house), and/or finding a new center of attraction or interest. However, critical degrees are at MC and IC (20Can/Cap) so events may be in crisis mode and the POTUS Sun is apex of the Jupiter-Neptune midpoint (see chart, upper right), the speculator pair. This condition is not aided by Saturn and Pluto, both karmic, at the Foundation (IC) of the chart, their midpoint (17Cap30) activating the 1993 Great Conjunction/s of NWO planets, Uranus and Neptune (see chart, lower right). Plus, we naturally think of the harsh Saturn-Pluto conjunction of January 12, 2020 @22Cap46 which will exactly conjunct the natal Vertex of Donald Trump (a point of fated encounters).

Yet the 2019 Solar Return POTUS Sun is afflicted by a square from disruptive Uranus, a time when the actions and decisions of others rule and challenge Trump's goals, plus, the separative South Node (the 'tail of the dragon') on October 27, 2018 will swipe our POTUS Sun thus limiting Trump's power and leadership ability. Of course, the cosmic event of SN to POTUS Sun occurs approximately every 18.6 years, the last time in Spring 2000 when President Bill Clinton visited South Asia. Will Trump leave the continent to forget his troubles a while?

Plus, there is more to the 2019 Solar Return Moon for it acts as the handle of a Bucket shape of planets linking two halves of hemispheres (here, public and private) and shows where a release of intense energies is found. The Moon here acts in similar fashion to the lead planet of a Locomotive shape where an executive urge toward success is the goal. As Bucket handle at MC, allegiances are adapted to where efforts count the most and others are inspired by Luna's unremitting zeal (Jones). And of course, any Mundane Moon represents The People or, the public.

With a Libra Ascendant, chart-ruler Venus in 2nd house @14Sag36 applies only once, to conjunction with Jupiter, also in 2nd house but Scorpio is on the 2nd cusp. Venus also rules the corporate 8th house and her hook-up with Jupiter describes conditions of exaggeration, overindulgence, overstatement, ostentation, a lack of a sense of proportion, and a wasting of good fortune. Of course, Libra is the sign of the Scales of Justice so Trump's ongoing legal battles are suggested and with his natal speculator trio of Neptune, Chiron, and Jupiter rising--his natal 2nd house Jupiter (17Lib27 Station Direct) precisely rising. And we'll surely hear more of Trump's protestations of "it's not fair!," a favorite complaint of a Libran Jupiter.

And there's chaos-lover Uranus in Mars-ruled Aries again (7th house of Partners and Open Enemies) with its tendencies toward fanaticism, blind zeal, violence, reformist urges, anarchy, and violence (Ebertin). Deceptive Neptune @14Pis35 is in 5th house of Gambling and Risk-Taking after completing the fifth and final return to natal position in the founding horoscope of the Republican Party--and still conjoining fixed star Achernar with its crisis at the end of the river and risk of rapid endings themes.

Now more clues may be found in the day's Air-Fire Sun AQ-Moon Leo blend of energies via a fabled leader who was born under the blend's auspices for his famous remark reminds us of Mr. Trump's tiresome despotic tendencies: "My people and I have come to an agreement...they are to say what they please, and I am to do as I please." Of course, Trump cares very much what people say--about him! For his nibs it's all about appearances and 'good' public relations no matter how deceptive the 'good' may be--and the more publicity the better. So maybe the 10th house 2019 Solar Return Moon in Leo will fill that attention-grabbing bottomless pit of his for a while.

In closing, we know that the Full Moon hinted at here actually perfects on January 21, 2019 @00Leo52 as a Lunar Eclipse, the second eclipse of 2019 after the Solar Eclipse of January 6, 2019 @15Capricorn in the 2 South Saros Series and of course, both eclipses add additional karmic implications and 'wild card' Uranian energies to the Solar Return 2019 of Donald Trump's White House tenure. And if the alleged 'good fortune' comes to pass may it relate to a return to his previous life in New York for Mr. Trump even though the idea of a theocratic Pence presidency is more frightening and anti-American than many of us can now fully realize.

17 Libra is known as the arrest degree! Keeping my fingers crossed!

Thanks Grace4Ayla ! Are you referring to rounding up his 17:27 to '18Libra' in Sabian Symbols: "Two Men Placed Under Arrest"? If the law is followed there should be more than two! also 16-17-18 Libra are 'electrical' degrees according to Nicholas DeVore. This must be part of Big T's 'magnetic' charisma (which affects some folks other than myself). Plus, his Jupiter at an electrical degree does precisely trine his 10th house natal Uranus, planet of electricity!

The thing that caught my attention in this chart were the two "Thor's Hammer" configurations with the points of "inescapable blows" being the Leo Moon in the 10th and the Sagittarius Venus/Jupiter conjunction in the 2nd... perhaps these blows are both to and from the pride of being President and excessive foreign income when the semisquare of Uranus in the 7th to Neptune in the 5th completes these configurations