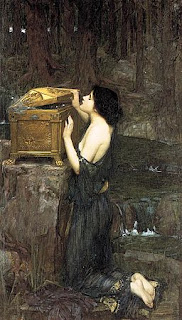 Today, March 31, 2019, at 2:00 pm edt the Sun @10Aries38 shines directly upon asteroid Pandora who in Greek Mythology opened a jar of all manner of evils and illnesses upon the world and represents a gift that is actually a curse. Rounding up the Sun's degree to '11 Aries' we find an appropriate Sabian Symbol (word picture) for our current woes, "The President of the Country"...POTUS.

Now I'm just telling you what books say on such topics, take your own meaning as you wish (and eliminate the "woes" part if that's your viewpoint; however, I cannot concur). And note that the negative expression of '11 Aries' tends toward "vain pretence." 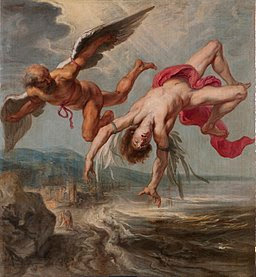 Then with an intuitive lunar message, at 2:00 pm edt today the Moon clocks in @19AQ46 and reflects her light upon asteroid Icarus who flew too close to the sun during his escape attempt and fell from grace because his wings (which were only fashioned from wax), melted and he was cast into the sea. This resulted, of course, from his not listening to the advice of a higher authority, the voice of experience, we might say. Rounding up Luna's 2:00 pm position to '20AQ" we find a word picture of "A Big White Dove, a Message Bearer" with a negative expression that tends toward "sanctimonious self-deception." Ouch!

Now does Icarus represent on some level America under Trump as a Pandora figure who busies himself knocking out supports of all kinds as he releases ills across our land? That he would fulfill his campaign promise to build roads and bridges--infrastructure--now seems laughable to me for this self-styled "King of Debt", this bankrupt artist extraordinaire. His focus on building a 'wall' instead seems even more inappropriate in the light of such mighty promises of restoration of our crumbling infrastructure.

Plus, Trump and the GOP now planning to take away the healthcare insurance of millions of Americans qualifies as Pandora's illness-releasing in my book--Trump's campaign promises to the contrary notwithstanding.

And yet...are you still hopeful he'll 'come through' for America? If so, then you'll be needing that last little bit at the bottom of Pandora's jar which some believe is, as do I, a tiny little ray of hope!

'11 Aries' and '20AQ' from The Sabian Symbols in Astrology, Marc Edmund Jones.