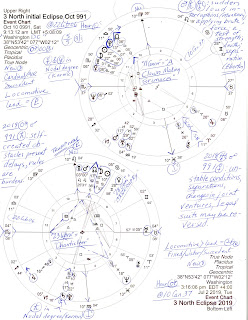 Here you see DC Horoscopes of both the July 2, 2019 occurrence of a 3 North solar eclipse @10Can37 and 3 North's initial eclipse which manifested on October 10, 991 @22Lib06. When seeking more information, solar eclipses may be viewed through the lens of their initial eclipse sign--here, it's Cancer as seen through a Libran lens. Obviously, one difference is that Cancer is ruled by the emotional Moon (karmic family ties), relational Libra by Venus, one of the money planets denoting small amounts of money, luxury items, value, and evaluations. Then considering all the legalities active in the Collective now thanks to the very litigious Donald Trump, the Libran Scales of Justice will also be part of the July 2, 2019 eclipse conditions - plus, 10Can37 falls between US natal Sun (13:19) and Jupiter (5:56) with America's natal Venus (3Cancer) close at hand.

In the financial realms (according to Ebertin), the Sun-Jupiter pair relates to wealthy and/or prominent people, extravagance, squandering, and spending money unnecessarily (ex: a border wall). Michael Munkasey adds: 'Thesis: a country's reputation in the eyes of the rest of the world and the personal renown and acceptance of its leaders; the country's ability to lead others' (now destroyed). And 'Antithesis: the executive of the nation battling with the legal and justice parts of the government; a religious or philosophical system which ties the effective leadership of the country to a predetermined course of action'. Would that be the anti-nation-state Great Plan the anti-democracy GOP endorses? And/or perhaps this refers to those who arrogantly think they can speed up God's plan for planet Earth? Are they the same people?!

Well, maybe the July 2, 2019 solar eclipse will simply bring another round of karma in an attempt to teach a spendthrift, wasteful US government and its corrupt 'leadership' yet another financial lesson--such as taking better care of its citizens (Cancer = the homeland; patriotism). But of course the trouble is, the karmic lesson must also include the rest of us.