Horoscope of the White House November 1, 1800

A Brief Look at the White House Foundational Horoscope of 1800

On November 1, 1800, President John Adams moved into the nearly completed Presidential Mansion, later known as the White House. That morning, a Full Moon @8Tau55 perfected at 8:35:30 am LMT and this lunation decides the hour, minute, and second of the hand-drawn White House Horoscope you see, below.

Why hand-drawn? Because if you've ever owned or used a printer-scanner that you loathe with every fiber of your being, then we're on the same page today for mine has chosen to pull its occasional antic of simply refusing to print. Scan, yes, print, no. So taking matters into my own paws, here's a messy horoscope for you, ink blotches and all. Perhaps enlarging the image is a good idea, perhaps not, so I must leave that decision up to you, dear reader, and good luck. 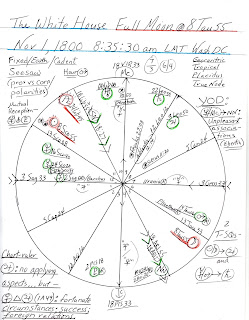 As you see, the Full Moon falls across the 5/11 self-will axis and the shape of the chart is a Seesaw pattern indicating a pro vs con nature that must constantly balance polarities. The Full Moon perfects during an active Mars Hour with planet Mars Rx @19Tau06 and in the 6th house of Military, Police, and Civil Service. Mars rules the 5th house of Risk-Taking via Aries and the 12th house of Politics, Karma, and Backroom Deals via secretive, brooding Scorpio.

As you see, the 12th house is quite full of planets including Chiron conjunct Mercury @24Sco20, a position that conjoins the natal IC of Donald Trump (but that's just about the only mention of his name I shall make in this post). Also in 12th are idealistic Neptune in Scorpio and a rising Venus @2Sag00 which supports the trine between Venus and chart-ruler Jupiter and its capacity for foreign relations, diplomacy, fortunate circumstances, and success. Listed, lower left, is the fact that chart-ruler Jupiter makes no applying Ptolemaic aspects to other planets which emphasizes Jupiter's sign (royal Leo) and house position (8th house of the Occult which probably hints at the Freemasonic practices of the Founding Fathers and their use of Sacred Geometry; plus, Washington DC was built based on ancient megalithic yard measurements and principles).

And in the most-often used natal horoscope of John Adams (October 30, 1735 2:57 am LMT Quincy, MA) we find his Sun in early Scorpio (spotlighted by the Full Moon of November 1, 1800), Moon @20Ari15, and Ascendant 24Vir03 which falls near the Midheaven of this White House chart. However, his natal chart's Rodden Rating is C for 'original source unknown' yet a steamy Sun Scorpio-Moon Aries personality blend does seem quite right for this pugnacious, suspicious fellow known then and now for his penetrating intellect.

So! Hopefully I may one day be forgiven by certain exacting members of the astrological community for daring to use the moment of the November 1, 1800 Full Moon to time the first official use of the White House because I wanted to post the foundation chart of our White Lodge (doesn't it look like one?) on Stars Over Washington for anyone's future reference--and because I write and publish on behalf of my ancestors who sacrificed, fought, and died to help establish our fledgling nation.

No, it isn't much but it's the least I can do while waiting for an annoying, unreliable printer to go belly up so I can replace its sorry self.

Why, I believe I'd even impeach it if I could!

Coming to America in June: Trump Solar Return 2019. Because as goes his nibs, so goes America.