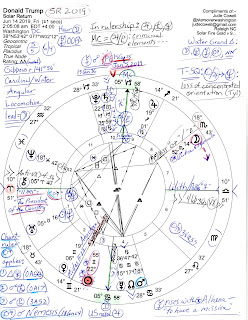 This is a brief consideration of the 2019 Solar Return Horoscope of Donald Trump which spotlights for one year the SR house of his natal Sun (22Gem55) of Communications and the Lower Mind; Mercury-ruled Gemini is on the 3rd cusp giving opportunities for expression while Sun-ruled Leo on the 6th house cusp suggests active 6th house matters such as military, police, and civil service issues along with health and daily rounds. 6th cusp 27Leo32 holds Trump's natal Mars @26Leo in tow (energy, motivation, physicality) and may rope in his natal Ascendant (29Leo; physical body; Self) as well along with his royal Regulus rising.

Meanwhile, chart-ruler Mars @18Can42 in 4th house (touchy Mars in emotional Cancer) makes three applying Ptolemaic aspects in the chart which are listed, lower left. Note that the Ascendant degree ('11 Aries')'s Sabian Symbol is: "The President of the Country" ('Keyword: IDEALIZATION...negative expression: an often well-meaning but usually destructive assertiveness or vain pretense' -Jones), plus, Mars also rules the corporate 8th house of Big Business, Credit, Debt, Insurance, and more. Its cuspal symbol ('19 Scorpio') is, "A Parrot Listening and Then Talking"...Keyword: CONVENTIONALITY...negative expression: idle mimicry and self-gratifying pretense' - Jones). So our nation will receive a double dose of pretense on our calendars as if it weren't already penciled in on the Oval Office schedule. And as you know, there are several parrots in the Trump administration who echo whatever Trump orders them to say if they want to keep their positions (as long as he keeps his!)

The applying aspects of Mars: 1. trine Neptune (in 12th house of Politics, Large Institutions, Karma) work is carried on behind the scenes possibly to the benefit of charitable institutions, marine concerns, the pharmaceutical industry and its consumers, the energy industry, ship building, and ocean cruise companies. 2. opposite Saturn (in 10th house of Career, Public Status) resentment of and resistance to authority, attempts to circumvent rules, regulations and laws, plus, delays, cancellations, anger, frustration, and physically difficult tasks. 3. opposite Pluto (also in 10th house) suggesting hostile forces aligning, contests of will, antagonizing formidable opponents, failed manipulations, gaining the lower hand, and lack of control. Best advice for Trump's SR 2019 Mars is to leave the status quo alone!

Here's an excerpt from my previous notes on Saturn conjunct SN:

Extreme limitations; rigid habits out of harmony with the prevailing culture’s methods and ideas; isolation and seclusion; cooperation is the lesson; painstaking attention to detail as all external influences may be disregarded–esp in obscure fields; individualism achieves in a class by itself. (Sakoian and Acker, Astrologer’s Handbook.)

Then there's Trump's chaos-creating guiding planet, Uranus, rising in 1st house which denotes sudden, unexpected events coming soon which no one, not even the Uranian Trump, can manage well. That transit Uranus is now in Venus-ruled Taurus, sign of growth, possessions, and intolerance, indicates a period when unusual sources of income are sought, risking all in one throw of the dice, and there can be a disruption of the money supply--for Trump and/or for the nation. Earth changes and Environmentalism are also suggested by Uranus in earthy Taurus.

Other chart factors include a Scorpio Moon (changes, breakdowns) and the current Solar Eclipse of January 5, 2019 (until about two weeks before the Solar Eclipse of July 2, 2019 @10Can37) at Midheaven (The Goal Point), as you see, with its theme of 'joining an unusual group and gaining a great deal' (Brady) which imprinted upon the 116th Congress and which is here opposed by transit Mercury @15Can36 (the natal Ascendant degree of the Pentagon and of US progressed Jupiter Rx since 1905); Mercury opposing law-maker Saturn indicates opposing opinions and conflicts continuing and suggests the involvement of the US Congress. Also this opposition may relate to Trump's recent threat to shut down the government and hold US citizens hostage--again--because the
Democrats won't stop investigating him.

And as you see, SR Mars @18Cancer, the warrior planet is on course to conjunct Trump's emotionally deprived Saturn in Cancer, a transit of obstacles, frustration, delays, anger, and the imposition of unwelcome authority upon his nibs. This conjunction perfects only once on March 21, 2020 in the 4th house of the SR 2019 chart posted here.

Then as you see, SR 2019 Pluto opposes Trump's natal Saturn (23Cancer) showing that his attempts to enforce his authority will continue meeting with resistance by a higher power (Pluto). Of course, transit Saturn opposing natal Saturn is, for anyone, a time of regret for past actions (which Trump says he never does which is a large part of his inability to learn from his mistakes--which he 'never makes') and making progress needs reflection and analysis of what didn't work before so that adjustments can be made toward better outcomes. This is the 'life lessons' transit intended to inform so that a more realistic direction can be determined and which so far, leaves the flawed Mr. Trump AWOL from class.

And so the Siege of Trump continues as harsh cosmic agents of compression and karma Saturn and Pluto near their conjunction @22Cap46 (January 12, 2020) which happens to land directly upon Trump's natal Vertex of fated encounters. Plus, we may wish to note that '23 Capricorn' is a degree of governmental authority according to Nicholas DeVore (Encyclopedia of Astrology).

I really like your page.. Looking forward to seeing what January 12 brings. Thanks for all of your details. Greatly appreciated.