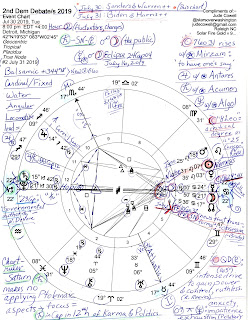 As the Democratic Debate schedule shows, the next match-up between Democratic candidates will be held July 30, 2019 at 8:00 pm edt (5:00 pm pdt) in Detroit, Michigan. The first night's debate list includes Sanders, Warren, Buttigieg, Klobuchar, O'Rourke, Bullock, Delaney, Hickenlooper, Ryan, and Williamson. Second night (July 31) it's Biden, Harris, Booker, Castro, Yang, Benet, de Blasio, Gabbard, Gillibrand, and Gov. Inslee. Both debates are being held prior to the New Moon of July 31, 2019, a seeding of new ideas and plans, yes, but New Moons suggest darkness when things go bump in the night. Around the time of a New Moon is not the best time for activities that need publicity, however, the fact that the July 30th debate begins during a Lunar Hour promises some measure of public notice.

And of course, New and Full Moons are capable of affecting earthly events in similar Uranian fashion to Solar and Lunar Eclipses by disrupting and/or bringing new directions along with the possible uncovering of secrets, scandals, and/or inconvenient facts.

Of course, fulfillment and culmination of such New Moon ideas and plans, many of which will be mentioned during the July 30 and 31 Democratic debates, will occur on or around the Full Moon of August 15, 2019 @22AQ24. Obviously, these July-into-August lunations fall across the Self-Will Leo-Aquarius axis as does America's Nodal axis of destiny (July 4, 1776) with Aquarius at its best the sign of humanitarianism which continues to attach more to the Democratic Party than to the reactionary Republican-turned-Trumpian Party.

Now as you see in the above horoscope, communicating, debating, negotiating, message-bringer Mercury Rx @24Cancer (here ruling the 5th, 6th, and 8th houses) is in process of performing its annual US Mercury Return (24Can11) with all that that implies (US Mercury oppo Pluto Rx). This Mercury Return is a 'three-fer': 1. June 20; 2. July 29; and the third and final conjunction to natal position on August 3, 2019. This period contains off-and-on Neptune trines to our Mercury (intuitive ideas and insights) and Pluto oppositions to it (a 'natal echo' for America) suggesting that info or intel may be misused, and greater control is sought over communications--and including issues of sex against minors. Certainly obsessions and mental manipulation are spotlighted by Mercury-Pluto, plus, we have the 3 North Solar Eclipse energies of July 2, 2019 running in the background with its 'obsessive' theme and 'news transforming a situation' - news that possibly involves young people (Brady). As it has. There's also a Sun-Pluto quindecile in the chart, another US natal echo of ruthlessness and an intense drive to gain power and control. Who do you suspect wants the Democratic nomination more?!

Please enlarge the image because marked on the chart, lower left, is a note about chart-ruler Saturn's lack of applying Ptolemaic aspects which places focus on Saturn Rx's sign, degree, and house position--rising with Pluto Rx and foretelling of their Great Conjunction on January 12, 2020 @22Cap46. That Moon (the public) and Mercury are opposed here by this upcoming karmic conjunction (8:00 pm edt in the 12th house of Karma and Politics) hints at the difficulties already felt in the social and political environments and the harsh measures taken by the Trump 'administration' toward children (Mercury) and women (Moon). Such topics are sure to be mentioned during the July 30th debate perhaps early in the evening but if not, they should be. Perhaps the Kite pattern of high-flying success will provide positive energies with the Moon (We the People) as its tail.

But before anyone flies away we should note that the Saturn-Pluto combination of energies also relates to financial matters and to various levels of constriction and compression so we may expect that Senator Elizabeth Warren (she the Moon?) will have the perfect opportunity to discuss America's financial condition and her proposals ("I have a plan") as she attempts to wrest the lead in the 2020 Campaign from Senator Bernie Sanders in the July 30th debate and thereafter.

Yet in closing we must also give a shout-out to Jupiter Rx still leading a Locomotive pattern (of the high-powered executive) - strong in his own sign, yes, but weakened by his retrograde condition (turning Direct August 11). Is this boundary-breaker Donald Trump? My suspicion is that yes, it is, and his empty promises, falsehoods, and propaganda (moneybags Jupiter the politician and broadcaster) continue to affect our public discourse by hideously distorting what should be a democratic American agenda by, for, and of We The People.

If you wish a look back at the previous June 2019 Democratic Debates try my Moon-Tracking post for these were the first and as such they set the tone for the whole Democratic Party enchilada.