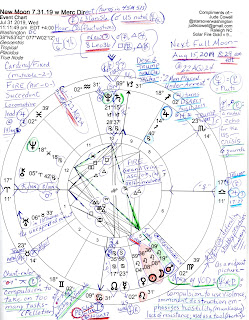 Image: New Moon @8Leo36 July 31, 2019 11:11:49 pm edt Washington DC. Note that if potent, New Moons may act as disruptive Solar Eclipses, Full Moons as revelatory Lunar Eclipses. The culminating stage of this particular New Moon is the Full Moon @22AQ24 on August 15, 2019 8:29 am edt; all are 'lunations' and all may affect or influence historical events with Total eclipses having the strongest influence as does location within the path of visibility (note: I use eclipse degrees symbolically whether the subject is in 'the path' or not; disagree as you wish!).

Rising 17Ari11 makes Mars chart-ruler but with no applying Ptolemaic aspects to other planets which focuses on the warrior planet's house and sign (5th house in Leo conjunct wifely Juno, an asteroid which also relates to nation-states and politics). However, Mars is apex of a YOD pattern (crisis; turning point; special task; spiritual opportunity for karmic progress) with the Neptune-Pluto sextile at it base (3A10; the supernatural, drugs, and/or, organized crime) = Mars, plus, we might wish to rope Saturn (15Cap37 Rx 10th house conjunct the January 5, 2019 2 South Solar Eclipse--'joining unusual groups') into the YOD pattern as well so that midpoint pictures form with certain potentials--Neptune-Pluto = Mars: compulsion to use violence; imminent destruction emphasizes hostility; lack of resistance; used as a tool; and Saturn-Neptune = Mars: defending shabby practices; emotional depression or sickness; listlessness. (Note that Mars @19Leo09 approaches a Trump Mars Return, a bi-annual event for us all--his 2019 Mars Return perfects on August 12 (11:27:04 pm edt) with a Moon-Mars inconjunct suggesting his usual Mercury-Neptune square's misjudgment of people, the forming of 'binding alliances' with those who then take advantage of his misplaced indulgence (exs: Putin? Kim Jong Un?), plus, he may be feeling powerless to oppose the oppressive demands of others and may suffer loss through collusion (yep--that's the exact word Rob Pelletier uses in his book Planets in Aspect!). Also note that his 2019 Mars Return's Mercury-Neptune midpoint @24Tau48 conjoins Trump's natal Midheaven (which conjuncts enraged Algol) so his tendency to 'live among the clouds' of his fantasy world is once again obvious to the public and suggests self-deception, lying, and going the wrong way, things the whining manbaby does so well.

Trouble is, he takes the rest of us down with him to the extent that we allow him to. Kind of a kamikaze POTUS we might say, sabotaging America all the way!

Now if you dare, check out Trump's 2019 Mars Return chart, a two-year horoscope, where you'll see that the July 16 2019 Lunar Eclipse @24Cap04 also conjuncts the Return Midheaven (The Why? and Goal Point of any horoscope) to the degree when the chart is set for Washington DC--with Return Moon @23Cap52, a timing agent, reflecting Trump's natal Vertex (22Cap51), a point of fated encounters and possible changes in work conditions. His Vertex is activated like all get-out by Moon conjunct Pluto Rx @21Cap12, an intense planetary pair that relates to inconvenient secrets being revealed--such as hidden children and it 'encourages violence and crime' and reveals obsessions that cause 'a misuse of resources' (Munkasey). So with the revelatory July Lunar Eclipse angular at the most visible point of his 2019 Mar Return chart we may expect more scandals and secrets to be leaked and/or uncovered--possibly financial or investment-related in nature or having to do with authority figures or issues, matters of security, his illegitimacy as POTUS, and/or parenting concerns. Yes, there look to be many boo-hoos in store for Mr. Trump as 2019 morphs into 2020 but an 'escape hatch' of a deal may be in the offing as well. For his fellow culprits have to protect their own hides after all--and perhaps they all took some freaky sort of oath to bind themselves together.

Now as you see in the above chart (my notes penned on), the Leo New Moon perfects during a Lunar Hour of fluctuations and changes with Mercury, planet of messages, plans, and young folk (and changes), stationed and ready to turn Direct in 45 minutes 51 seconds @23Can56. From this we see that basically, America is in process of a Mercury Return to 24Can12 (3x in 2019: June 20, July 29 Rx, and August 3) which reinvigorates any natal aspects to our 1776 Mercury--in other words, our Mercury-Pluto opposition is stimulated. You'll note that the July 16, 2019 Lunar Eclipse @24Cap04 opposes and reveals US natal Mercury Rx (July 4, 1776 5:09 pm LMT) which activates our national Mercury-Pluto opposition of manipulation, surveillance, propaganda, secret plans, and/or transformative thinking and ideas.

And when action planet Mars is apex of a YOD pattern an acute time of crisis is indicated (which means temporary chaos). Indirect, out-of-tune actions may be taken, forces must be mobilized, and vigorous new starts will demand courage and much effort. Plus, someone of a Mars persuasion (Trump, born with Mars in Leo rising?) is operating alone and unhampered by others (Tierney) which to me suggests complicity infesting the US government, media, foreign governments, and --?--. Of course, the YOD contains two inconjuncts (150 degrees) to Mars: one from Neptune (people who overstate their importance and are taken advantage of; physical conditions difficult to diagnose or treat; and/or being vulnerable to sexually transmitted diseases) and one from from Pluto (compulsion to take on too many tasks). Looks as if impatient, brash Mars is on the case--but in a Fire sign, let's hope arsonist Mars doesn't start any! And if we add a Mars-Saturn inconjunct to the cosmic picture we find hints of possible physical problems caused in part by inactivity, and/or the use of emotional blackmail in order to guarantee submission. On tape is sooo inconvenient.

Then at the Base or Foundation of the New Moon chart you see the current transformative, disruptive July 2, 2019 Solar Eclipse in the 3 North series (10Can37) conjunct the New Moon IC of Homeland, Home and Family. 'News transforms a situation' as nearby Venus in Leo rallies 'round the New Moon suggesting social events, luxurious surroundings, and possibly some currency manipulation. Meanwhile, erratic Uranus @6Tau33 rises in 1st house denoting unexpected events on the upswing (possibly of the financial kind), unusual sources of financing being sought, and a potential for natural disasters of the earthly variety to occur. (Has anyone checked on the status of Mount Saint Helen's lately?). The soon-perfecting Saturn-Pluto conjunction, shown here in the Career 10th house, is on display for all the world to see and understandably plagues the minds of many (remember these two karmic heavyweights join forces approximately every 30+ years or so--last time in 1982 @27Lib36 bringing us 'trickle down' Reaganomics, a financial scam if there ever was one).

Interestingly, the January 12, 2020 Saturn-Pluto Conjunction @22Cap46 will conjunct the natal Jupiter Rx of the Republican Party (in its March 20, 1854 chart) and you'd think GOP 'ideals' of religious and social fanaticism would be hardened and severe enough without an increase of same, wouldn't you? Well, maybe this conjunction with wealthy Jupiter denotes a compression of the party's or the RNC's finances and donations on some level yet it doesn't seem likely--even though the NRA (November 17, 1871) is said to be suffering from a well-deserved financial lack these days. Yet Trump has already raised a prodigious amount for his 2020 re-selection campaign so he has that goin' for him and his alt-right friends of the vicious fascist persuasion.

Well, there are many other chart factors of note in the July 31, 2019 New Moon chart set for DC and hopefully you'll decide to ferret them out for yourself, then leave me an on-topic comment about what I neglected to mention underneath this post if you so desire. And remember: as always, this is 'freebie' content so please Share if you care! jc