My answers: yes he can and has and I hope and pray not.

As you know, Pluto now trods through Saturn-ruled Capricorn (sign of government, law, business), a placement with the disturbing potential of "the dictator" (Ebertin). Power planet Pluto is associated with racism and primal violence along with other -isms (exs: Communism, Capitalism, Socialism, birtherism, nativism, patriotism, nationalism--all exploitative in their various ways). Actually, I tend toward more specificity for evils such as racism by considering the duo of Pluto-Chiron and note that the rise of white 'supremacy' and other racist issues have been purposefully ramped up by social meddlers before and since the dawn of this 'New Millennium' and are 'inspired' in part by the December 30, 1999 Conjunction of Pluto and Chiron @11Sag22 conjunct what many astrologers consider to be America's natal Ascendant (12Sag). So Pluto-Chiron-R-Us in some measure--apparently about 30% or more of the US population in 2019. Why they prefer such darkness I do not know but I know that things do not have to be that way, so says the majority!

Now the Pluto-Chiron cycle is approximately 60 years in length and relates to the Collective Unconscious and the "manifestation of a mass need seeking an outlet at a particular time in history." (R. Nolle). During their cycle, at the squares and oppositions, "fierce conflicts" and "tension" are experienced so today with Pluto @21Cap Rx and Chiron @5Aries Rx we find their first square upcoming at some future point in time.

And as for Donald Trump and politics, here's an informative segment from Thom Hartmann posted July 15, 2019 concerning the racism of Donald Trump (and his ilk); the 1999 Pluto-Chiron Conjunction Horoscope is shown, below:

If you wish, please enlarge the following chart image to read my study notes; prominent is Pluto's agent, Mars @26AQ22 as apex of two midpoint pictures: harsh Saturn-Pluto (assault, brutality, ruthlessness; a gun with a cork in its barrel) and Mercury-Jupiter (the execution of plans; oratory). A cosmic time link is shown by this Mars directly opposing the natal Mars of Donald Trump (26Leo rising) which brings him into the picture on a personal level and reminds us that the Saturn-Pluto-Mars trio resonates all too well with Trump's natal Mars-Saturn = Pluto (brutality, bodily harm, murder, deaths of many people--Ebertin). It's the deepest part of him.

Then on January 12, 2020, fuel is added to any and all fires when Saturn and Pluto combine their karmic energies in Great Conjunction @22Cap46--conjunct Trump's natal Vertex of fated encounters and/or changing work conditions.

So highlighted in green on the chart are some of Trump's natal placements. Plus, you see the Pluto-Chiron conjunction's Prenatal Solar Eclipse ('PE') @18Leo21 (in 8th house) from the 1 North series which manifested as the 'King of Alarm' (or, 'Terror') Eclipse of Nostradamus fame (aka, 'The Mother of All Eclipses') and heralded the New Millennium. The next 1 North eclipse repeated as The Great American Eclipse of August 21, 2017 @29Leo--conjunct royal Regulus and Trump's natal Ascendant. As you know, its path of visibility split America into two halves, North and South--just like Trump tries to do. Plues, eclipses have the ability to activate fixed stars when they conjoin, you know, into either positive or negative manifestation and my personal view is that we as a Collective now suffer from the negative expressions of a vicious Donald Trump attempting to take America down with him as he goes and daily expresses 1 North's stressful themes of "information is distorted and possibly false" and "unexpected events" (Brady), events and lies through which the saboteur 'rules' by chaos. 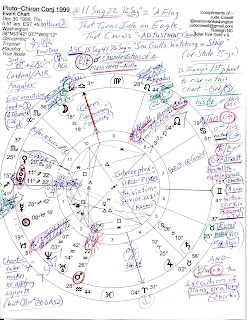 Some excellent deep psychological insights in this interpretation but I doubt too many of those living in the dark will wake up until it is too late and even then they will no doubt defend their ingrained egoistic beliefs rather than widen their scope of reasoning.

Trump does like to crow doesn't he? And pretends to 'embrace' the American flag.