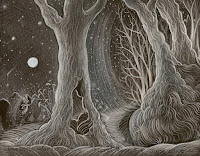 Is it Moonrise at the Crossroads for America?

September 12, 2019 brings another televised Democratic debate with thankfully only 10 candidates qualified to participate. In alphabetical order they are: Joe Biden, Cory Booker, Pete Buttigieg, Julian Castro, Kamala Harris, Beto O'Rourke, Bernie Sanders, Elizabeth Warren, Amy Klobuchar, and Andrew Yang. Air times: 8:00 pm EDT, 7:00 pm MT, 6:00 pm CT, 5:00 pm PT, and will be broadcast live via ABC from Texas Southern University, Houston, TX. My illustration you see here is posted in a spirit of We The People's dependence on the Democratic Party, allegedly the party of the people, to heft us through to a more beneficial path--if they can and will.

So as you know, the first Democratic debates of 2019 aired over two nights on June 26 and 27, 2019 and with the Moon changing signs over the two events, we were able to 'Moon-track' them. However, with only one debate scheduled this time around we must be satisfied with a Pisces Moon to pair with a Virgo Sun. The public mood (Moon) on September 12th is a Piscean one of compassion within a sense of victim-hood, martyrdom, and suffering, and reflected and activated by the cruel, brutal administration currently in the White House.

Yet Pisces is a creative sign as well and signifies rising to the heights or plunging to the depths, an up-or-down decision (direction) which must be chosen. We know where Trump stands in that department (at the lowest point possible thanks to his regrettable lack of character--to this materialist everything is 'transactional', as you know) but where do the American people stand when it comes to Trump's hateful policies against children and others? We must wonder since, First he 'came for' their children, will ours be next?

Now hopefully we can count on such vital topics to turn up in the September 12th debate but if not, why not? For there's an awful lot to complain about with Trump in the Oval Office! Self-serving tactics and rhetoric used in order to get elected is one thing but after all, America and the entire world are under many dire threats right now so will Democrats mention on stage such problems as Trump's vicious immigration policies, his lack of climate change preparations and natural disasters, the US and global economies, etc etc--and will they offer at least a few viable solutions or ideas of how to improve conditions? Yes, Senator Elizabeth Warren "has a plan" but what do the others offer and will they share more openly on a debate stage or elsewhere? For it's mighty late days for US political candidates to keep hidden their true intentions, even ham-strung as they are once in office!

As you know, the astrological Moon is a handy timing device and the September 12th Moon @6Pisces+ opposes the debate's previous lunation, its Syzygy Moon, a New Moon which perfected on August 30, 2019 @6Vir47 (6:37 am edt) and spotlighted the victim-savior axis of Virgo-Pisces. As you know, New Moons are a 'seeding' phase for new or developing plans and ideas and point toward culmination, fulfillment, and/or a full awareness of some kind at or near the next Full Moon (September 14, 2019 @21Pis05 2:26 pm edt). Additionally with a Full Moon, we may expect relationships to be part of this Virgo-Pisces emphasis and, similar to eclipses and disruptive planet Uranus, all lunations may suddenly reveal secrets, inconvenient facts, scandals, and/or may trigger changes of direction. You know--like when you're at a crossroad and must choose a direction--except that with Uranian vibes involved, the Cosmos may choose for you if you balk too long.

And if we consider the September 12th debate vibes of Sun Virgo-Moon Pisces we know that influences are on the Mercury-Jupiter-Neptune side (rulers of Virgo and Pisces) so that common sense with a streak of idealism and a tinge of over-promising may be noticed. Yet Earth-Water blends are perhaps the most practical of combinations and have an innate ability to understand what's truly important. (Note that we may hear a candidate say, "what's really important" during the debate--it's been used before). Plus, someone's capacity to see both the forest and the trees may also be on display.

As for the cosmic energies running in the background of the September 12th debate, its Prenatal Solar Eclipse ('PE') falls into the difficult 3 North series of July 2, 2019 @10Can37 (among America's Cancerian planets 3--14 Cancer: Venus, Jupiter, and Sun = finances, economics, and POTUS in a glaring cosmic spotlight, possibly with shocks involved).

And one more thing--debating Mercury @27Vir39, planet of voting, discussions, negotiations, communications, rhetoric, changes, commerce, thieving, etc--applies to conjunction with Venus (27:59) and asteroid Hidalgo (the social climber; someone with Latin heritage; one of the power asteroids). Note that Mercury-Venus contacts suggest pleasant communication skills (Julian?) although I don't know how 'pleasant' a political event can possibly be! Plus, if we round up the conjunction's degree to '28 Virgo' we find, "A Bald-headed Man Dominates (a) Gathering of National Figures": "Keyword: DOMINANCE...positive expression: accomplishment through a completeness of self-mastery and a rigid control of others; negative" (unconscious/shadow side--jc) "expression: a sadistic sophistication." (The Sabian Symbols in Astrology, Marc Edmund Jones).

And so I shall leave it for you, dear reader, to decide just who this symbol may describe!

Additional Note: curiously, a google of Texas Southern University turned up Judge Lina Hidalgo!. Wouldn't it be funny if her name is mentioned during or in relation to the September 12th debate?!

The Chandra symbol for 28 Virgo is: "VIRGO 28
Autumn leaves pressed into a book.
The mind is a funny thing. It pours over experience with a fine tooth comb, yet only sees what it expected to see. The mind programs itself, indoctrinates itself thoroughly and intensively in the fine art of imposing the familiar and the assumed upon all of life. This is a maddening way to operate, yet it does not register as being so. Instead you like it this way, prefer it, advocate it, simply because it is self-reinforcing and self-perpetuating. You are after elaborate confirmations and validations that the little self is perfectly splendid just as it is. And you will be sure to get these. The transaction is guaranteed. But there is an unknown self who cannot breathe in this atmosphere, and who knocks at the door seeking entry and is not very pleased to be tuned out and pushed away and told that we are fine as we are and do not need to be stirred up by the voice of the rest of existence. "

From a book I do not have! Thank you Heartfelt. And come to think of it, I consider the way 'debates' are run these days to be a 'maddening way to operate'. Jude

Inside Degrees by Ellias Lonsdale - an excellent resource!