Wondering which of the three horoscopes for Ukraine found in Nicholas Campion's The Book of World Horoscopes might be triggered by karmic Saturn and Pluto 2020, I had a look and found that Ukraine's Autonomy Chart of July 16, 1990 resonates most fully of the three with the compressed, restrictive, harsh energies of the January 12, 2020 Saturn-Pluto Conjunction @22Cap46. As you see, below is bi-wheel displaying the major planetary contacts between the two horoscopes which are marked in red with my usual messiness. In fact, there is red all over both charts for this is no fun pointing out planetary conditions when the conditions on Earth that they reflect are full of threats, pressure, limitations, danger, and power and control issues--as Wolf Russia creeps around and Washington has turned unreliable under Trump. (Actually, I guess that's Big Bear Russia but never mind.)

So basically, the Saturn-Pluto Conjunction opposes Ukraine's Sun and Jupiter in Cancer while the difficult duo also conjoins the country's natal Saturn (21Cap53 Rx--chart set for noon since no exact hour is known by yours truly). 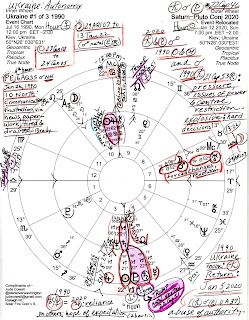 Listed on the chart, lower right, is the date of Ukraine's very recent Saturn Return - January 5, 2020, which adds to the karmic implications and opportunities of these times to step up, take responsibility, and correct past mistakes, if any. And naturally with natal Saturn in its own sign of Capricorn, relationships to authority figures are on the boil. And wouldn't you know--the only aspect made by Saturn in the Return chart is its conjunction to Pluto (0A37) denoting issues of abuse of authority (penned on, lower right).

A few potentials and possibilities for this massive pile-up of planetary energies in the third decan of governmental Capricorn beginning in January 2020 (or before) are penned on the chart, upper and mid-right, and are highlighted in red. Yet as you can tell, the turmoil has already begun some time ago.

Also notable between the charts, considering the vise the country is being held in, is an exact conjunction of transit Uranus @2Tau39 to Ukraine's natal Mars (2Tau33), an explosive condition suggesting danger and/or enforced changes. Plus, there is possibly involvement of natal Moon via Uranus (disruption of people's daily lives? excitement?) but without an exact hour for the 1990 Autonomy chart, we can only say for certain that during the 24-hour period of July 16, 1990, the Moon ranged from 29Ari07 (12:00 am EET) to 13Tau22 (11:59 pm) which, if that late a degree in Taurus, would provide Ukraine with an intense, dramatic Moon-Pluto opposition of outbursts, defiance, and 'attempts to gain control' - sometimes in an underhanded fashion (A. Oken). But chances are, the opposition is not within orb.

However, few of the charts' basic details are penned on (not my usual custom) for primarily the charts are posted here to show the Saturn-Pluto Conjunction and its effects on Ukraine's Autonomy planets of 1990. Data for the two other Ukraine horoscopes are listed, below, for those who'd like to check out the charts. But I can assure you that the July 16, 1990 planets are the ones that fairly scream under the pressure, constraint, and potentials for cruelty and violence of the 2020 Saturn-Pluto Conjunction already within orb and causing mischief, even grief.

So in closing, I direct you to the bottom of the bi-wheel where 2020 Sun, Saturn, and Pluto lurk for besides their contacts to Ukraine's planets, they also conjoin the natal Vertex of Donald Trump, a fated point of encounter (22Cap51). How any of this will pan out for Trump, Ukrainian President Zelenskiy, Putin, and the rest of the world we have only to wait to discover.

Interesting that a Ukrainian jet full of Canadians and Iranians crashed outside of Iran's capital soon after Iran's strike on Iraqi bases. Some reports that the plane was on fire/exploded before hitting the ground.