May 25, 2020 Memorial Day: With the destructive spirit of sacrifice and martyrdom once again sweeping across the lands of every nation, here is a dual image of the Horoscopes of World War I and World War II with my notes penned on. Data sources are from historical records, chart #426 (WWI, lower left) and #247 (WWII, upper right) from Campion's The Book of World Horoscopes: 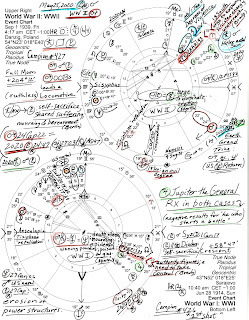 As you see, today - and of late - transit Pluto Rx @24Cap47 conjuncts warrior Mars (24:22) in the WWII horoscope while 1939 Mars, determined on success at all costs and efficient in Capricorn, leads a ruthless Locomotive shape, and yet Jupiter the General is retrograde ('Rx') as each war begins, traditionally an unfavorable condition or omen for 'he who starts a battle'.

And if we consider Trump as "general" of the current war against contagion (since he boasts himself to be a "war president"), Jupiter the General Rx makes some measure of sense in 2020 thanks to his neglectful mismanagement of what is yet another sacrificial war.

Additionally, today's Pluto conjunct WWII Mars suggests determination toward one's task yet Pluto-to-Mars denotes danger if revenge and/or anger are driving forces as they so often are for Donald Trump. Activities may involve potentials for secrecy, physical analysis, research and development. And karma.

So this Memorial Day 2020, amidst the still-raging pandemic and its threats of danger, many beaches in the US are crowded with sun worshipers as reported by CNN. It seems that the solemnity of the day is nowhere in sight.

hi thank you for this insight. i am complete amateur regarding reading the horoscope, please apologise. so just let me understand basically anytime we experience Jupiter the General Rx and Pluto Rx conjuncted with Mars, the war can occur? or it is basically a possibility of each year? i would appreciate the explanation and again sorry for upper amateurism. Lucia

Hi Lucsia Thank You for your question! No that isn't the case. Many factors go into the starting of a war, For one thing, the motivations, desires, and egos of the participants. But a basic factor you would prefer is for Jupiter to be moving direct. Have you heard the phrase "bottomless money pit" because that would be one result.

The cycle of Mars is approximately 2 years in length so contact with Pluto including squares, trines, oppositions can inspire various actions and events but Mars-Pluto contacts do often suggest overwhelming force, weaponry, anger, etc. Yet other planets must also be considered. Here we began with war so we know that was an outcome. Hope this helps! Jude