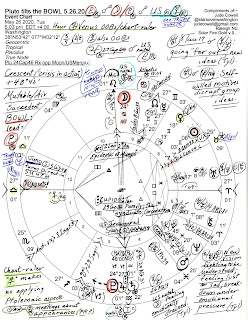 For a while now, transit Pluto has led the tilt of a BOWL shape of planets. Here you see a DC Horoscope set for the moment on May 26, 2020 that transit Pluto and Moon oppose one another across the Cancer-Capricorn security axis ('Moon-Saturn' = a health indicator along with ambition and strategy). Moon-Saturn's signs are intercepted across the 3/9 Communication axis (local vs foreign) suggesting that our problems are karmic and must be dealt with, one way or another. Power-mad Pluto @24Cap46 Rx tilts or tips the BOWL as you see while Luna, acting as an excellent timer (to the second!) makes up the opposite rim of the BOWL. A lack of balance is suggested while simultaneously, Pluto, within orb of US natal Pluto, opposes US natal Mercury Rx which implicates America's surveillance-loving, thought-controlling Mercury-Pluto opposition of July 4, 1776--here with transit Jupiter Rx @24Cap00 conjunct US natal Pluto Rx (27:32). Someone is misusing intelligence reports and/or leaking secrets, which in Washington DC comes as no surprise.

Now I'm not suggesting that the May 26th opposition identifies a moment or a day when a significant event will occur (which would take far more factors than one chart can show) but the chart is posted here merely as a symbolic horoscope spotlighting current conditions in society at the end of May 2020 particularly in the realms of Moon-Pluto, Mercury-Pluto, Jupiter-Pluto, Saturn-Pluto, and more if one cares to seek.

In general, possibilities of the noted planetary pairs include:

So What's Not in the BOWL?

The zodiacal signs not contained within the BOWL are: Leo, Virgo, Libra, Scorpio, and Sagittarius (except for South Node in Sag) and these describe huge areas of experience missing from current proceedings at the moment for the plutonians in charge and thus they represent 'challenges to existence' for those utilizing the BOWL energies as they advocate for a cause or a mission with greedy Pluto 'scooping up' all planetary energies (Jones). Plus, even without the lens of Astrology, few people are unaware of the titanic power struggles ongoing in America and elsewhere between radical reactionary political operatives--saboteurs, I call them, neo-fascists others call them--and the Establishment entities and forces which imply, if not promise, society a less chaotic existence (I'm for that! Can you tell?).

Meanwhile, the restrictive, constraining, tough-minded Saturn-Pluto Conjunction of January 2020 (@22Cap46 - conjunct Trump's natal Vertex!) continues to bedevil the globe, financially and otherwise--and their last conjunction of 1982 @27Lib36 ('Reaganomics') rises at Ascendant in this chart reminding us of our current potentials for difficult circumstances, loss, and silent power - some directly due to the limitations of Reagan era politics and economic policies (ex: cuts to mental health funding, corporate welfare, etc). Besides, we know that mundane Pluto is stealthy and manipulative all by himself and loves to wield silent power! And with karmic loss-leader Saturn by Pluto's side and strong in his own sign of Capricorn, what can possibly go wrong? (snark).

Well, for one thing, that's Trump's natal 12th house Pluto (10Leo02) near the top of the chart ('MC') as you see which always brings along his destructive, brutal midpoint picture of Mars-Saturn = Pluto: 'death of many people, murder, intervention of a higher power' (Ebertin). So we have that going against us as Trump corpses pile up and his particular brand of chaos and mismanagement reign--now with potentials for nuclear testing. Hopefully, nukes won't be 'the higher power' that intervenes.

So as you see at the Foundation of this chart (IC), the trio of heavyweights form a midpoint picture - Saturn-Pluto = Jupiter: 'difficulties caused through illness; social and religious fanaticism' (Ebertin) which pretty much sums up much of what's going on these days, yes?

And with the intense Moon-Pluto influence in this symbolic chart I'm thinking that the Secondary Progressed ('SP') Conjunction of US SP Moon and Pluto in October 2020 may be part of what's forewarned or pre-echoed in this chart. At the least, a cosmic time link is suggested between late May and October 2020 so perhaps Patreon subscribers of SO'W might consider a comparison between this horoscope and America's October SP horoscope recently published to Patreon!

Mention should be made of transit Jupiter, the planet of expansion and increase (not always a good thing since negative conditions can be made worse by his presence!), precisely conjoining the natal Pluto of America only once: December 7, 2020. So as you see, this year will be the 79th anniversary of "a date that will live in infamy", a reference to Japan's attack on Pearl Harbor what some have called a version of a 'false flag op' (FDR knew it was coming and did nothing to divert it--similar to Trump and coronavirus in 2020). The attack on Pearl Harbor was then used by Washington to justify America's entry into World War II - which was a case of doing what the Pentagon wanted to do in the first place - an example of a practical use of the Hegelian Dialect that creates a problem then 'solves' it.

And yes, there remains an awful lot of such manipulation and 'solutions' that miss the mark going on in US Politics, that "systematic organisation of hatreds".

So my question for you is: through our years of apathy and laziness, have We The People finally merited the sorry government we've long deserved?

Exact 2020/21 Transits to US natal placements include Pluto oppose US Mercury 3x: February 27, June 26 (this chart), January 1, 2021 (disturbing news, forcing opinions on others, crisis); Saturn conjunct US Pluto 3x (power and control issues, conditions and/or events too large to handle): February 23, August 4, November 20; Jupiter oppose US Mercury 3x: March 30, June 29, November 20 (blunt opinions; tactlessness). Note that November 20, 2020 stands out due to transit Jupiter and Saturn ruffling the US natal Mercury-Pluto opposition. Also note that other pertinent transits and influences must be factored in for a fuller picture to be gained--some negative, and some positive and thus mitigating. Thank Goodness. jc

Readers! Please note that each time the Moon circles round the Zodiac and there's a planet leading the tilt of a BOWL the Moon forms its opposite rim. I didn't intend to imply in this post that May 26, 2020 is the only date on which this has occurred recently but used the current opposition because it's two days away from when I'm writing and posting! :) Jude

I hope you don't mind me chiming in with complementary thoughts on the May 15, 1776 U.S. horoscope: The conjunction of transiting Jupiter to Pluto is on the night of Dec. 11-12, and both the progressed Sun and transiting Pluto perfect trines to the U.S. Sun in September, followed by Jupiter in November and Pluto next February, suggesting an unprecedented augmentation of the power of the President, perhaps while the economy sputters to a halt as it becomes clear that those who recover from the Corona virus can become reinfected after several months. [However, it has been reported that a group of people who get a lot of sunshine -- homeless people in Boston -- have very high rates of infection while showing no symptoms at all, so perhaps Trump will become a trend-setter with his home-installed tanning salon (the real significance of all that planetary business trining the U.S. Sun)].

John Schmeeckle, I don't mind at all John! Your insights are valued and always welcomed here. Pretty soon you may have me turning to the May 15th chart all together!! Jude