Stars Over Washington and "An Unsealed Letter"

May 15, 2020: Lots going on today in US Politics and in other parts of the world but here's a departure for Stars Over Washington: a publish of its Founding Horoscope as you see, below. For one thing, the 15th year of SO'W culminates on October 16, 2020 and a decision must be made as to whether SO'W should be shuttered rather than entering a 16th year of my fusses about how I don't appreciate 'what they've done with the place', the place being my former city of residence, Washington DC. I dissent because I care and believe that at least a few of my Revolutionary War ancestors would approve of my dissents about the disastrous route greedy and weak Washington politicians have taken our Ship of State, not to mention the foreign influences America's Founders dreaded and warned against. For these reasons, SO'W has always offered freebie content, for it's a labor of love for America, my only nag in the race!

Now the following horoscope is set for First Post timestamped 3:30 am edt on October 16, 2005 (6:30 am pdt) with the Sabian Symbol for its Ascendant (What?) @30 Leo = "An Unsealed Letter." Well, yes, it's always been that: a letter to my friends for anyone to read (such is blogging!) and with Regulus rising. At its Base or Foundation ('IC') is "27 Scorpio" = "A Military Band on the March" which tells you that the Bush-Cheney regime of that era and the Iraq and Afghanistan Wars, invasions, occupations, and destruction were the basis that impelled me to begin Stars Over Washington. As you see, at Midheaven ('MC') the Why? Point, is fixed star Algol with her rage and fury implications. And let's not mention how these chart angles mimic those of Donald Trump, plus, other contacts to his natal placements may be found for those who care to look: 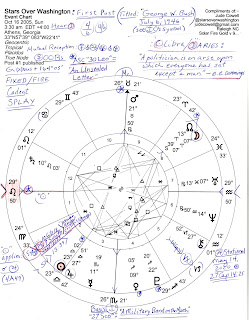 So! Did I check planetary positions in order to adjust the chart before I published at 3:30 am? Nope, only afterwards. As you see, not as many of my usual scribbled notes are penned upon the chart but a few factors are added for your convenience, dear reader. And as always, your on-topic comments are welcomed but freeloaders beware: all ads will be deleted, not published. TY! Jude

i very much appreciate your blog! congrats on the stamina and matriatism :) all the best in your endeavours.

Thank You both Barbara from Italy and Weaver I very much appreciate your weighing in on my decision and am happy to hear that SO'W is of benefit to you!

I learn from SOW. Is this anything to do with living on Capitol Hill? 😉

Hi Ostrova, do you live in the Capitol Hill area? My posts are primarily about politicians and politics which affect the entire country. So I'm not certain what you mean by your question. Unless you're a politician or a congressional staffer or aide!? Fill me in if you wish and TY for reading SO'W! Jude

Ouch! Chiron has been conjuncting the SOW Moon so I guess it is not a surprise that you are wondering if it should continue. It is appreciated <3

You got it Heartfelt thanks! Also perceptual shields are open! Jude