July 18, 2020: Unless a cancellation, rescheduling, or delay occurs (chart-ruler Mercury opposes Jupiter Rx), Trump's AG William Barr is scheduled to testify today (9:30 am edt) before Congress and defend ongoing militarized actions in Portland, Oregon, among other acts of the Trump regime.

Since it's almost 9:30 am as I type, this is a quick posting of the morning's horoscope and as you see, Barr's Saturn, then Mars, rise on Capitol Hill and the natal Pluto @15Vir27 of Senator Kamala Harris (his favorite questioner, no doubt!) precisely rises at 9:30 am along with her natal Venus (17:53).

A high-flying Kite pattern (success) with testifying Mercury as its tail is shown along with a YOD pattern of crisis, special task, and/or karmic opportunity with lady Venus (Senator Harris?) at apex in Mercury-ruled Gemini. Questions! Yet Mr. Barr is there to restrain and cover-up, his usual political gig.

And with chart-ruler (and Midheaven-ruler) Mercury applying three times we may expect severe disagreements and conflicts (opposes Jupiter Rx), perhaps a lack of logic, inspired ideas that can be misused or glamorized (trines Neptune), and a display of opposing forces during these intense proceedings as information is manipulated to someone's advantage, withheld, or the wrong answers are deliberately provided in order to mislead. Obviously with Barr protecting Trump, damaging secrets will be closely held (opposes Pluto).

Now much more info is embedded within the chart but time is short so I'll trust you, dear reader, to sleuth away if you're so inclined! 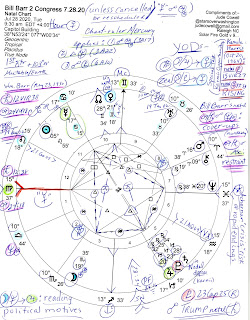