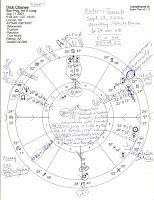 As I'm reading more and more about theories on Dick Cheney's possible culpability in orchestrating the attacks of 9/11/01, I'm posting on his secondary progressed chart (the physical plane) for the day and the hour.

Using his birth location (Lincoln, NE) to progress his natal chart, there results a major picture at the top of the chart...the MC/Aspiration/WHY Point of the chart--Pluto (power; control; manipulation; coping ability; transformation; death; cataclysms; volcanic explosions) and Chiron (the wounded or the wound; the maverick; blindspot; catalyst; shaman; initiations) pointing to the Mc-->Pluto/Chiron = Mc.

And on 9/11/01? Pluto 12Sag38, Chiron 23Sag03, and their midpoint, Plu/Chiron = natal Mars 17Sag46 of VP Cheney! Yep, that's right--tr Pluto and Chiron lined right up with Cheney's planet of initiative, energy, and action--Mars, aka the god of WAR...the Plutocracy Duo pointing directly at Dick's Mars, ya might say...Mars, the instigator, the actor, the fighter and his Sec Pluto/Chiron at Aspiration/Goal Point.

And the HOW? Point of this chart, the IC or Foundation Point is conj his Sec Mars and US natal and Sec Pluto. If he did it, that's how he did it - secret hand, secret power, US military power, you name it, he had control (Pluto) of it. More on his Sec Mars just below.

Robert Bowman, former head of the "Star Wars" project, and who is running for Congress, FL, 5th district, is making waves and calling Cheney the "architect of 9/11"...and as you've heard by now, Cheney was "playing" "air drills" that morning with his finger on the fantasy button - did it slide off onto the reality button? I've often wondered this myself since 2001. Today's post is just a sampling of the situation astrologically.

(UPDATE 9.17.06: most sources now say that Cheney was in DC on 9/11/01 but the chart and these comments apply for his progressions which are calclated based on his natal chart. Some astrologers change to wherever a person is located when progressing a chart, but here I do not.)

Bowman says Cheney's "drills" were a "cover" so that the FAA and NORAD didn't know what was real or false as the planes approached their targets. And while he may be correct, I'm not so quick to give these governmental agencies such easy "dazed and confused" passes on this "cover." Wouldn't put it past the VP, but I wouldn't put it past the agencies either.

Back to his progr'd chart:

At the Foundation/Ic Point, lurks violent instigator, Mars, at "30Cap", the "A secret meeting of men responsible for executive decisions in world affairs" degree:

EXECUTIVE POWER...Keynote: The power to assume responsibility for crucial choices arrived at after mature dicussions with those who share this power.

This degree speaks of an "occult hierarchy", secret committees in the White House, and the decisions of a supreme Council of quasi-divine beings. And, of course, Capricorn is the sign of business, politics, and law. (Note: This Mars is now opposite Pluto in his sec chart 2006 which may lead to more uncovering of his actions on 9/11...his use or misuse of power, bwo zealous Mars/Pluto.)

The 8th cusp also happens to be at the degree of the last conjunction of Jupiter and Saturn, the societal combo. Jupiter is used to represent the R Party and Saturn, the Ds. I have stated here and elsewhere, that their conj of May 28, 2000 describes the official start of our "2-party system" becoming one big happy "party"...or words to that effect. Not that they weren't united in purpose before! But a new cycle of cooperation began as Bush became the "man of the hour" - the choice of globalist puppetmasters everywhere.

(Note: the next exact square between Jupiter and Saturn: legislative stalemates; Reps vs Dems; economic sluggishness--is June 22; last square is Oct 25...squares being the blockage/obstacle/crisis stage of a cycle.)

Nep/NN = lack of community spirit (no kiddin'); deceit used with others; anti-social behavior; wrong ideas about others; peculiar conduct in communal life; secret associations with others interested in the paranormal (as in "quasi-divine beings"?)

So we have Neptune's deceit with NN's connection to the Public...and with a fated or karmic flavor. (Remember that "karmic" feeling in the air along with the dust settling and the sad funerals? Many people remarked upon it in the months after 9/11.)

Saturn (responsibility; authority; control) at 13Tau22 is conjunct the Inaugural Ascendant (in DC, noon, Jan 20 each time) by less than one degree...which signifies the Office of the Presidency. Cheney, the 'secret president.'

Moon is in the 8th house, "5Gem": "A revolutionary magazine asking for action"...TO REACH BEYOND ESTABLISHED FORMS...Keynote: The explosive tendency of repressed feelings and root emotions (see Plu/Chiron above--"a reversion to primitivism"?)

Sec Moon is an oft-used timer, as you know. Wonder which magazine this could be? An association's journal perhaps? Who-who-who?

Greatest Strengths: zest; capacity to take an idea and run with it; eye for opportunity; oomph and chutzpah; tendency to get carried away; immense dynamism; a sharp mind; a single-shot, high-velocity rifle or a hot-metal-spraying shotgun (I don't make this up!)

"The ruler of a nation"> CENTRALIZATION OF POWER...

Keynote: The power resulting from the formal integration of the collective desire for order.

This deserves a quote from Dane Rudhyar, whose Sabian Symbols are being used here; his punctuation marks:

"At this stage of the cyclic process this symbol refers to the appearance of the (personal) ego as the central manifestation of a type of "order" which transcends and seeks to rule the emotional and instinctual drives of the individual person...
a desire for a larger type of integration has now emerged...(it is) social-collective and institutional.

At this ego level, laws and the restrictive power of a police force are dominant features.

Psychologically speaking, this means that the integrative principle is the limited, more or less narrow "I am" realization. It manifests itself as the personal ego exerting its will to control the reactions of the bio-psychic organism." #

Seems to me that this "I am" means "he is" - and ruthless power, control, and a new economic world order are his, and his colleagues', ultimate objectives.