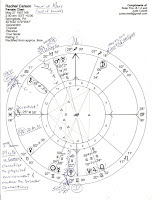 Early this morning, marine biologist, teacher, and writer Rachel Carson (the reason we have an EPA) had her 100th Solar Return, which is when the Sun returns to its natal position. This may occur within a day of the actual birthdate, as you see.

For sixteen years Carson worked for the U.S. Fish and Wildlife Service so she could support her widowed mother and other family members. Her testimony on Capitol Hill led Pres. John F. Kennedy to form the EPA because of her consistent efforts to sound the alarm on DDT and other chemical pesticides--which she accurately termed bio-cides--and which continue to affect--to poison--our environment and our health today--from our children to our honey bees and beyond.

Rachel Carson's natal Sun Gem/Moon Sag personality blend gave her an excellent writing ability--she made science accessible and beautiful to the layman--and her love of travel (Sag Moon) was handy for a marine biologist's journeys.

Airy/Fiery Sun Gem/Moon Sag is an intellectual combo, with a deep curiosity and an ability to communicate flamboyantly. There may be an emotional immaturity residing within this eternal student and a healthy helping of the scholar.

Outspoken, with a love of ancient learning, this blend is friendly, yet impatient, enthusiastic and restless. It's a very romantic combination in spite of her being denigrated in her lifetime as a "frustrated spinster" by detractors who wanted to undermine her message, her warnings, and her science.

This blend's Images for Integration: The Pied Piper leads his merry band of youths to the amphitheater on the hill for an afternoon of music lessons, philosophical teachings and baseball...A young man goes abroad to attend university and becomes a foreign correspondent.

This Sun/Moon blend is shared natally with poet and philosopher Kathleen Raine, who said:

Appropriate quote for our current Saturn/Neptune opposition (their last exact opposition June 25, 2007), don't you think? 2007's science (Saturn; facts; realism) is being heartily challenged by nebulous, veiling Neptune's deceptions and illusions in order to obfuscate certain scoundrels' actions and culpabilities--same as in Carson's day with their campaign against her dire message which threatened their bottom line!


If you missed Living On Earth today you can listen to the broadcast or read Living On Earth: Rachel Carson on their website. This LOE feature tells of the FBI dossier on Carson--it's all redacted (blacked out)--with the exception of one word: RUSSIA ! Back in those days, the Cold War was raging (and being spun) so it was enough simply to be linked with the USSR--however tenuously or off-handedly--to undermine anyone's credibility. Ye olde propaganda campaign...or so they thought.

Thing is, the direness of her warnings and predictions were soon so patently obvious that it must've been difficult to sway all but the most partisan industry types and high-handed tycoons with their bucket-carriers, for she took on industry, government, and science all at once. A female David vs Goliath.

As I studied her day-of-death chart (April 14, 1964; age 56) from cancer, I couldn't help wondering if her work with chemicals had anything to do with triggering her illness. Know what I mean?

Carson's marvelous, pioneering books, Silent Spring (1962) and The Sea Around Us (1951) are always in print, still timely, plus Silent Spring is currently ranked 1,113 on Amazon!

Pluto is the link between our solar system and the galactic realms while Chiron links the inner planets with the transpersonal (outer) planets and is the primary ruler of ecology. This potent trine along with her n Pluto in Gemini--and in Gem's house, the 3rd--gave her great categorizing and ordering ability, and her Saturn in Pisces (Pisces = the sea! fish!) in 12th house (also associated with the collective unconscious and the ocean) conj ASC is the signature of the scientist.

And the collective unconscious relates to Cetus, the Whale for good measure--the story (or some would say, archetypal myth) of Jonah who had to speak out the truth.

The link above to Silent Spring puts the commemorative edition practically in your grasp with its 130+ full-color illustrations from all over the globe...from phosphorescent shrimp to whales and giant squids!

Yes, all who know me know that I'm partial to the fishies, and you may view the proof at Dreamyfish Art if you wish. Must be that Saturn/Neptune influence of having n Sun Cap/Moon Pisces which inspires Saturn's botanical renderings within oceanic Neptune's illusive dreams...
Posted by Jude Cowell at 6:04 PM