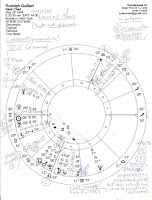 Born in Brooklyn, NY, May 28, 1944, the Sun arose for Guiliani that day at 6Gem55 with the Moon clocking in at 19Leo23--conjunct Jupiter (Geo Bush has an expansive Moon/Jupiter conj natally in Libra.)

Since the Moon was in Leo for the 24 hours of his birthdate, we may use Sun Gem/Moon Leo for his personality blend, a blend shared by poet Walt Whitman: "I celebrate myself; I sing myself." Seems appropriate.

Sun Gem/Moon Leo (Air-Fire = a "live wire" full of exciting ideas and the ability to communicate them with zeal and enthusiasm; taken to the extreme Air-Fire = bombast, bluster, and a tendency to be carried away by own rhetoric and eloquence; has charisma and joie de vivre; with Airy Sun and Firey Moon: the effect of a hot-air balloon; a Utopian idealist seeing ever more distant sunny shores; may ride on a moralistic high horse):

This combo indicates one who is a colorful conversationalist and storyteller, convivial with a childlike sense of fun, and a good dramatist. He's good at improvisation, generous, and intellectual and he embodies the eternal child (Gem = the puer) whose fantasies of royal blood (Queen E knighted him for helping with 9/11--in precisely what capacity I do not know) ensure a confident social performance.

This blend assumes its natural right to be exactly who he is: astute and somewhat mischievous. A flair for self-dramatization may be behind his recent "phone calls from the wife" schtick which weirded out so many people during recent speeches (including his important you-can-vote-for-me speech to the NRA!)

There is a rebellious streak here as well and a fussiness which may turn up in the love life. This is a strong but not overbearing personality interested in a wide variety of human perspectives (can this trait cause the dreaded flip-flopping?)

Guiliani is a natural salesperson and "ideas person" who doesn't like to be pigeonholed (who does? unless they're a pigeon), and when it comes to big issues he tends to argue with a sense of impassioned authority.

Yes, Rudolph can be a true inspiration to others (through communication at least.)

Greatest Weaknesses: haughtiness and stubbornness which surface when feeling unappreciated; energies put into excessive socializing which keeps abilities from being fully developed; the need for flattery and for holding center-stage.

A king holds court and surprises his audience by joining the mandolin player in a duet of song and story.

With Moon in Leo, RG's reigning need is for approval, recognition, and applause, all of which the game of politics seems to have supplied him with in abundance, with fake phone calls as part of the act.

So if you click to enlarge his natal (sunrise) chart, you'll see that all planets lie within 12Taurus--2Libra. A bowl pattern is formed which looks a bit unbalanced, doesn't it? It certainly concentrates his energies into an all-about-me view--same for George Bush's natal chart and Leonine psyche. Yet somehow I wonder if Guiliani's concentration of planets is at least partially on the partnership side of his natal chart?

With 'working class' heritage from his parents, he could have Virgo rising, couldn't he? And that would give him a very full Public hemispheric emphasis, if so.

Yet the 'empty' signs and degrees--from 3Libra through 11Taurus--have midpoints, asteroids, and South Node within them. This *blog is not written to teach Astrology (although I can't prevent it if a smidge accidentally filters though) so let's stick with a few basic things about former NYC mayor Guiliani. Besides, there are plenty of Astrology tutorials online, if you wish to study them!


Such as: his Pre-natal Eclipse Series (PE):

Occurring prior to his birth on Jan 25, 1944, this is the 18South Series which Brady's Predictive Astrology gives as:

endings, separations, and partings which could bring grief and anguish, yet these separations bring new situations and encounters which lead to positive outcomes.

This is the PE of Marilyn Monroe, btw.

In youth Rudy considered the priesthood y'know, but it seems the romantic lay-dees won out! But can Rudy win the presidential sweepstakes in 2008?

Transit Mars has been visitng his natal Saturn, planet or authority and responsibility. This is a time of becoming more focused and organized. It's a time for careful planning. There may be dental work or minor surgery, colds or flu and obstacles encountered now are usually found to be of one's own making.

There is hurrying flavor to this transit with a touch of rebellion against the rules. Yet greater credence may be given to age or experience before taking action--it's a good time to ask advice from one's mentors.

And tr Midas has been hanging about with his Sun/Uranus conj in Gemini and possibly bankrolling his progressive political inclinations. Sun conj Uramus is free-wheeling, willful, and arrogant with its bad self. (Oops--was that a smidge of Astrology leaking through? Sorry!)

This pairing is intolerant of tradition and the social limitations that result from it--hence his three marriages, one may suppose; and Sun conj Uranus supports the "live-wire" quality already mentioned. Politics is a perfect career for a Sun/Uranus individuals, but a stable relationship is a must for keeping the natural eccentricity tamped down to acceptable-in-society levels.

Well, Hillary Rodham Clinton certainly sounded and looked presidential on the Sunday political programs yesterday, so I'd say that jolly Guiliani has a lot of issues to become more serious and better informed about asap--because empty bombast and amusing stories won't be enough--and the usual political dirty tricks have become such a bore.

(Click to enlarge chart for a few more details.)

* This blog is written to make comments about politics and varminty politicians by use of Astrology. Shameless, I know. But so are the pocket-liners.


And did you know that Mr.A.Cat has transmitted a new limerick A Hillary Cat which is now published at Lim's Limericks? He has.
Posted by Jude Cowell at 2:33 PM