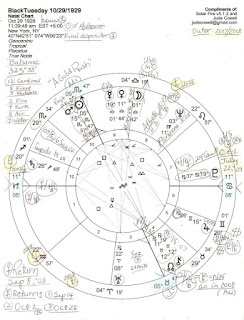 'Black Tuesday' Oct 29, 1929 marks the massive stock market crash and this is the horoscope for Sun-to-Midheaven on that day.

Appropriately enough, the Sabian Symbol for the Sun/Midheaven degree, '6 Scorpio' is: "A Gold Rush."

We can be certain - just as in 2007/08, that the folks with 'real money' did not and are not losing their shirts, and to my way of thinking, are behind the shell games they play with other people's lives and fortunes.

That other forces are in league with - and opposing - them complicates the picture but suffice it to say, it's not you, me, the baker, or candlestick maker who are at fault. It's the 'experts.'

Some interesting midpoint pictures are repeating now in 2008 and I've marked them on the chart (click to enlarge):

Chiron and North Node (the public; the path or destiny) are conjunct then as of late (but in AQ) and the midpoint of Jupiter/Uranus is upon them.

Who are the Jupiter/Uranus crowd? Fortune-hunters; adventurers; inventors; organizers (Ebertin.)

Another interesting correlation between the meltdown of 1929 and today is that moneybags Jupiter (15Gem26 and Rx here) has two midpoints of power and wealth upon him - Pluto/NN and Pluto/Chiron.

Pluto/NN represents large masses of people and their common destiny; large business concerns; mass meetings; and exercising influence upon the public. I would add, powerful connections and associations.

Pluto/NN = Jupiter: the desire to obtain position and power by force through the help of other people; the attainment of great gains through others; forcing oneself into a power position; self-promotion; attaining success through others (November elections esp the presidential election?)

Time grows short and I must mosey...hope to complete this post later on...
Posted by Jude Cowell at 10:48 AM