April 26, 2010: America's Secondary Progressions are displayed below with the chart upper right set for Philadelphia, PA, our nation's natal location; lower left is our Sec chart re-located to the White House.

Some differences appear between the two locations as far as the houses go, as you see. Click to enlarge the image and you'll find a few of my notes scribbled there but for today I'm focusing on Sec Moon (our daily rounds, domestic and security issues) nearing conjunction with Sec Neptune, exact in October 2010.

These Sec Moon-Neptune implications for the US are emphasized by the fact that transit Neptune (nearing the end of Aquarius) has been affecting our natal Moon for a while now - US n Moon ranges from 18 to 28 AQ, depending on which US natal chart you prefer from July 4, 1776.

As mentioned in previous posts, tr Neptune to natal Moon (we-the-people) is an unstable time of feeling a sense of rootlessness and loss, even despair, as home foreclosures continue to decimate families, increase the US homeless population, necessitate movings-in with Mama, put refugee and immigration issues on the table, make commitments hard to keep, and bring thousands of US soldiers home to face overwhelming difficulties as they return to the country they and their families sacrificed so much for.

An atmosphere of dissatisfaction with dwindling options and weakened financial conditions are shown in part by home owners walking away from their mortgages in droves which this transit well describes, especially with such conditions now being undergirded, or ramped up, by the Sec Moon-Neptune conjunction you see here. The peak of this Sec conjunction will be in October, and there will be a lessening of its effects by the end of 2010.

Tr Neptune to n Moon also indicates thievery and fraud. We-the-people could use some protection from Capitol Hill and the White House more than ever before yet recent and ongoing legislations fail to protect us to any appreciable degree as special interests of Big Industry hold corporate sway over the Capitol Hill plutocrats when it comes to the lowly US consumer...weakened and deceived (Nep) consumers (Moon), politicians bought and paid for.

As you see in the Philadelphia chart, our Sec Moon 20Vir21 is poised to enter Sec 2nd house (Earning Ability; Values; Self Worth) with Sec Neptune already posited underminingly in 2nd h and causing confusion and deceit in financial matters and loss of workers' incomes. (US natal Neptune 22Vir25 is even closer to being joined by Sec Moon 20Vir21 than the later-degreed Sec Neptune 26:17 Rx; Sec Moon exactly conjs Sec Neptune in about two months = June 2010, just prior to the financially stressful July 11, 2010 Solar Eclipse @ 19Can24, in 8th house for Washington DC, and conjunct difficult Fixed Star Castor.)

Opposite this 'watery' Moon-Neptune action, the 8th house (Shared Resources, Credit, Debt, Insurance, Legacies, Transformations, Death, the Occult, etc - with deceptive, confused Pisces on the 8th cusp) has the Venus/Chiron conjunction snugged around the 9th cusp in the White House version - this is a very sensitive point at the end of the 8th house (in both charts.) Venus-Chiron has to do with sacrifices on the altar of relationship and with money issues but perhaps you, lone reader, already know more about Venus/Chiron than this reluctant astrologer!

Sec Moon 20Vir21 conjuncts Fixed Star Denebola, keywords: to go against society, or, against the mainstream...perfect for swimming in or against the Lunar-Neptunian tides of dissolution and fraud, I suppose. This seems to relate in part to homeowners walking away from upside down mortgages especially since Neptune can so often bring a kind of loss due to dissolving conditions - and Virgo is the sign of The Worker and Server which relates to high unemployment.

We might also expect natural and other disasters involving water and oceans (the recent 'explosion' on the Gulf of Mexico oil rig platform, with Neptune = oil, and the sea being a good example.) Food supply issues may be in the news, along with toxins ('additives') that are put into our foods by Big Chem as noted in such films as Food, Inc and TV's Jamie Oliver's Food Revolution - these and related issues will be emphasized more strongly going forward. They must be addressed more honestly.

And I should mention that Neptune relates as well to mass media, the entertainment industry, and to propagandizing; the Moon links to the public and public relations campaigns, as does the Moon's North Node (NN)...'contacts with the public'.

Now let's consider the Neptune/North Node midpoint sitting upon the ASC in the Sec chart set for the White House...'Nep/NN' = anti-social elements; a lack of community spirit (Ebertin); as you see, Moon will be in Nodal Degree when 'she' reaches Neptune 26Vir17 (Oct) and the White House version of our Sec chart shows Neptune and Sec Moon @ Nodal Degree (26) for October, showing karmic conditions in play.

(Being a Saturnian rather than a Uranian astrologer, 'in Nodal Degree' gives America a 'reaping what was sown' flavor to Moon-Neptune-NN, which is what I mean by karmic or fated conditions. Of course, Wall Street fraudsters and banking gangsters are giving us a lot to reap and plenty to weep about.)

From Ebertin, Tyl, and Munkasey - as always with midpoint pictures, any, all, or none may apply...some factors are noted on the chart image, but here I'll type out all of the possibilities for you...

Nep/NN = ASC: suffering from inhibitions; feeling uncomfortable in the presence of others; experiencing deceit and untruthfulness from others; being duped or disregarded (Hello, Capitol Hill? your constituents are calling - jc); disappointments; appearing strange to others; ignoring the reactions and attitudes of other people; mentally repressing outside influences while concentrating more fully on one's own needs.

Well, there's a brief snapshot of America and her evolutionary condition as of April 26, 2010. Yes, we're in a dire state, and we don't need Astrology to tell us that for we can simply look about the place.

Yet the one thing Astrology brings to the table which no other system can is the element of Time with its cyclic timing ability making it possible to see that by the end of 2010, at least some of the undermining influences of Moon-Neptune will lessen for we-the-people.

Now send the Wall Street fraudsters to jail, SEC - you paper tiger, you! 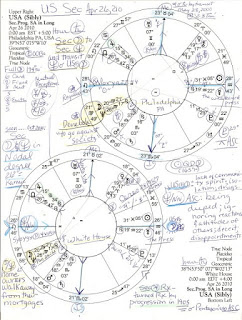 Note: @ bottom right you see "Sec Jupiter turned Rx by progression in 1905 - conjunct Pentagon's natal ASC" but our Jupiter's Rx Station of 1905 was in early Gemini; here you see Sec Jupiter 15Can34 - still Rx - and now conjunct the Pentagon's n ASC = bottomless money pit for war profiteering generals, ideologues, politicians, contractors, and for the secret society types who foment wars the world over and funnel US resources into plutonian coffers and imperial projects.
Posted by Jude Cowell at 11:41 AM