The Full Moon 3AQ00 on July 25, 2010 @ 9:37 pm edt is an annual Buck Moon and my friend C.J. Wright, author of the wonderful Auntie Moon blog, has published an excellent article telling us how to read a Full Moon in relation to our personal horoscopes.

Check out C.J.'s Full Moon in Aquarius: Feel Like Bucking the System? for details. For where better to go for lunation information than from Auntie Moon herself? ;p

In Washington, they like to say The Buck Stops Here whether they mean it or not. (And yes, it's usually just a political slogan trotted out when expedient.)

But where will the buck stop in your chart for July-August 2010? If you know where '3AQ' falls, there you'll find you inner lunar Bambi! (Mine's in 5th house and I'm still feeling traumatized by a childhood viewing of Disney's film Bambi.)

Now in the Inauguration 2009 horoscope for President Obama, '3AQ' was inhabited by a 10th house Jupiter, planet of big bucks, bankers, The General, professors, gurus and yogis, priests, and Republicans.

If we look to the Sabian Symbols for clues to 2010's Buck Moon we find that:

'3AQ" = "A Deserter from the Navy"...'Keynote: The individual's self-realization through a crucial repudiation of a collective status which has become unbearable. (Rudhyar, An Astrological Mandala.)

(My italics in memory of that great Shakespearian bard, Sarah Palin.)

Dane Rudhyar goes on to explain this degree as: 'Something with collective social value is being potentially destroyed, but nature is not the destroyer. Man, the individual, steps out of his bondage to collective patterns and ideals. He may "find himself" by means of a sharp renunciation of his social birthright, i.e. by a crucial process of DESOCIALIZATION.'

Well, many things of collective social value have been and are in process of being destroyed with the collusion of many entities and forces as big industry titans like BP Oil execs seem to have forgotten their own social birthrights as part of the human race. This makes the exploitation of the natural world and of their fellow man more palatable and must in part account for their ability to sleep at night and face themselves in mirrors next morning, imho. (Vampirism notwithstanding.)

Then, if you prefer the rounding-up method for the symbols, there's '4AQ" which may relate more to Inugural 2009 Jupiter 3AQ32 - and this is also Jupiter's position in the natal chart of Bavarian Iluminati founder, *Adam Weishaupt:

'4AQ" = "A Hindu Yogi Demonstrates His Healing Powers"...'Keynote: The disciplined use of spiritual energies in restoring the natural harmony disturbed by man's inharmonic attempts to transcend nature through mind.

It is the spiritual duty of individuals who have been able to tap the vast reservoir of spiritual forces pervading our planet to use these energies for healing their less-fortunate comrades. (...)

Self-discipline, purity of motive, compassion, faith in the divine order are required--and the FOCUSING OF SPIRITUAL ENERGY.'

May people of good faith take the lead in focusing of spiritual energy and thereby put the dark forces behind us, forces which intend only ill for all mankind...even the power elite who imagine themselves above such mundane considerations.

*Read more on the Astrology of Adam Weishaupt's Illuminati here.

A Blog Note: this Buck Moon weekend will be sparse in the blogging department as I work to complete an article for a certain online magazine. For those with an interest in using the lens of Astrology to look at US history and its effects on the future of America, I hope you'll be open to checking it out. But for now, the article is To Be Announced.

Now here's one of my favorite Full Moon drawings to wish you a Happy Buck Moon! 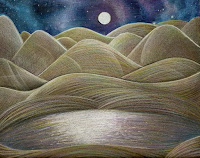 Brief Update 7.24.10: NPR's book review feature this morning with Scott Simon made a rare mention of author, Pearl S. Buck. The mention seemed of interest to me for Sunday's Buck Moon though one occasionally hears of a long-ago lady author who lived in China until 1934 and used her experience to write her classic novel The Good Earth with a rousingly affectionate and loving description of Chinese peasants and a perfectly rhythmed writing cadence. The novel was a best-seller in 1931 and 1932; it won the Pulitzer Prize in 1932.

Pearl Sydenstricker Buck was a prolific literary genius yet her work has been overlooked by cultural gatekeeprs as this article points out and thus is seldom recommended.

Yet Buck was the first American woman to win the Nobel Prize in Literature (1938) and her multiple works of fiction and non-fiction are worth a look from later generations. It's been later than her heyday and in our own times that feminism has successfully been diluted and given a black eye.

Those with short attention spans might better enjoy reading her short stories!
Posted by Jude Cowell at 9:12 AM