With a spirit of full disclosure concerning what the US government purports to be doing in my name, I'm posting the WikiLeaks Afghan War Diary 2004 - 2010 link which I had to switch to Firefox as my browser to obtain.

By the time you click to read what the Pentagon has been up to in this privatized-for-profit war in distant Holy Lands - the link may be broken, or links within the page may not be Live. The site may be taken down or otherwise sabotaged.

Therefore, you may wish to try The Guardian.

This will be primarily because the White House and the Pentagon are understandably upset that this massive information dump has occurred and as one of the Vietnam-era Flower Power Generation, perhaps I may be forgiven for remembering fondly Dr. Daniel Ellsberg and his leaking of The Pentagon Papers which helped mightily to change the debate on the Vietnam War, eventually ending US aggression.

WikiLeaks founder Julian Assange has compared the leaking of The Pentagon Papers with the documents he has recently released on his site and - weeks ago - made available to 3 newspapers including The Guardian and Der Spiel.

Yet it seems that so far, the White House isn't 'challenging the veracity' of some of the reports such as the info on Pakistan's ISI spy service working and planning with the Taliban while the Pakistani government facetiously takes billions of dollars of 'aid' from American coffers to allegedly 'fight' the Taliban.

It is said that the newspapers' publishing of the 'Afghan War Logs' have been coordinated with WikiLeaks. This may be considered an 'attack' on the White House and Pentagon - on the nation, actually. The 'national security' card is already being played and will win out, I suppose.

Well! It seems that Sunday evening's Full Moon @ 3AQ00 has brought to light many transgressions which are unavoidable in war. These Bush-Cheney wars were, however, completely avoidable in both cases as they were neocon warhawk wars of choice.

President Obama has so far stuck with the set course toward imperialism and plunder.

My previous post mentions that the Full Moon of July 25, 2010 is/was a Buck Moon, and I wondered where the 'buck stops'...turns out, the buck stops with America and is driven by our government's unquenchable thirst for more power, more resources, more territory, and more wealth.

Even if these things belong to someone else.

It's win-at-any-cost and might-makes-right as the tattered, threadbare cap knit together by strands of 'spreading democracy and freedom' is rent now in two and the freedom bells ring hollow in the United States of America this morning.

Surely there can be no going back. Is this An Awakening, perhaps? Out of the slumber of war?

For me there is no patriotic flag large enough to cover the hypocrisy and the out and out criminality of what the American government has perpetrated in Afghanistan and Iraq - in my name.

And my horror includes the idea that it may be my own government whose finger-on-The-Button is most worrisome in this dangerous world where Niobe's Plea too often goes ignored by cynical idealogues who plot against little children while remaining so very far above the fray. 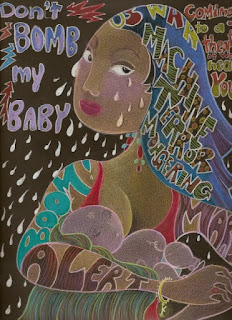 Niobe's Plea is imported from Cosmic Persona Designs (for 17+ only, for Chiffonery Art is involved.)

The Niobe archetype in Myth and Astrology: the grieving mother; this includes Ecology and Eco-Awareness of our living, breathing Mother Earth.
Posted by Jude Cowell at 2:29 AM