With Capricorn ruled by Saturn (fear) and Pluto's deep fear factor involved in the cosmic picture, the fear of loss (Cap) and how to cope with it (Pluto) is on every one's menu on into 2011, which will be The Year To Get Through as best we can!

The July 11 Solar Eclipse is in the 12 South Series which has a time link to its last manifestation so we may expect similar issues from that year to reappear - or, the exact same issues in various guises may re-rear their hoary heads for the world's reconsideration and, hopefully, for better solutions.

Last time, 12S manifested on June 30, 1992 @ '9Can' so Cancerian issues of security, safety, domestic concerns such as real estate, homelessness, refugeeism, food, grains, and milk - anything that nurtures and protects - were on our minds and in the headlines as they are again. Plus, nowadays we have genetic engineering of seeds and food supplies to worry about along with changing weather patterns interrupting growing seasons; famine cannot be ruled out.

And of course, 1992 is one of the years of the 90s decade that the New World Order was rearing its (ugly) head in a more public way than ever before with Bush Sr's mentions of it as a venture which will be successful. Then came 1993, studded with the Great Conjunctions of enlightening planets Uranus and Neptune, the pair which this reluctant astrologer considers to be a signature of the Illuminati and their plan for world domination. You may disagree, and that's okay.

In 1992, Uranus and Neptune were within orb but not as strong as they would be in 1993 when partile (exact.)

Yet it seems obvious to me that Bill Clinton's election to the presidency was part of the NWO agenda with NAFTA's 'free trade' pretending not to be code words for the dissolving of borders, nation states, currencies, and, yes, the United States of America. In the news now is the UN calling for dumping the US dollar.

Yes, 'thanks' must go to Bill NAFTA Clinton, as I call him.

Also, the first bombing of the World Trade Center took place under his watch as perhaps a sort of a dry run for 9/11 though I doubt any WTC attack victims of either year would appreciate my typing that. Still, both attacks are part of a process which is my point today on America's 234th birthday as the July 11, 2010 Solar Eclipse draws near - and occurs one week into our nation's Solar year.

A bright spot has to be 12S's astrological implications that 'things at first seem worse, then clear with successful outcomes' (Brady's Predictive Astrology) but if the Eclipse influence helps any of the dire conditions we face, the 'then clear' part could come in early 2011, or later this year since a Solar Eclipse's influence lasts from one to the next, approximately 6 months. (Though a strong one may take effect up to 2 weeks prior to its actual occurrence.)

So will BP's efforts to stop the Gulf Coast oil gusher bear fruit in mid-July as they've said it might, before their previous estimate of August? Well, Cancer the Crab does live in Gulf waters after all! Or should I say, lived?

A Few Historical Events of 1992

Britain's Queen Elizabeth dubbed 1992 her 'annus horribilis' with Windsor Castle damaged by fire (and eventually she had to foot some of the bill, poor thing!), plus the marriages of three out of her four children ended in divorce (Charles and Diana formally announcing their separation in December.)

Financial scandals were in the news as usual, and a loss-infused Saturn/Pluto square brought a bleak, heavy mood similar to what their 2010 square brings now (though their square didn't become exact until March 1993, prolonging its effects.)

The Serbs bombarded Sarajevo, heating up the Balkans conflict and the UN condemned 'ethnic cleansing' by the Serbs as a war crime. (War is a crime, imho.) More marriage troubles appeared as Nelson Mandela and his wife separated (like Al and Tipper Gore?); the venerable Lloyd's of London revealed massive losses; in New York, John Gotti was convicted of murder and racketeering.

(Gotti may be gone, but murder and racketeering remain.)

Also in 1992, race riots erupted in Los Angeles after Rodney King's video-taped beating by police was shown ad infinitum on TV, Hurricane Andrew devastated Florida and the Bahamas, and women priests were allowed to minister in the Church of England after much wrangling and controversy.

On January 8, 1992 while visiting Japan, President George Herbert Walker Bush was poisoned (my theory) at a state dinner, vomited into the lap of Japan's Prime Minister, then promptly fainted. Influenza was said to be the cause. Perhaps. But if I'd felt that ill before dinner, I would have begged off and had a tray sent up!

Oh, and did I mention that Bill NAFTA Clinton was elected US President? Bet Poppy B threw up again when he heard that.

A more complete list of the events of 1992 by month may be found here. 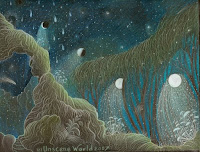 Moon Phases, a drawing from my Secret Moon Art collection of cosmic images with an occasional bit of Astrology blended in.
Posted by Jude Cowell at 12:03 PM