Today President Hosni Mubarak has been vanquished by his people!!!

It's evening in Cairo and with protesters gathered at his palace after last evening's disappointing address, Hosni Mubarak has handed power to the Egyptian army and asked them to be in charge of the country's affairs.

This blogger celebrates the liberation of the Egyptian people (well done!) even though I know my global-elite-backed government may be shaking in its jackboots at the news (never mind what topcats in Washington say - their masters can't be happy) and Zionist Israeli government officials must be mightily worried about this amazing pardigm shift of power in the Middle East.

Egypt's populist overthrow is a major blow to the New World Order!

UPDATE 2/11/11 3:52 pm est: LINK TV is reporting that Swiss authorities have frozen the assets of the ousted Mubarak, a wise move (much of his hidden funds probably came from 30 years of US taxpayer money); also you may be interested in a fresh post: Mubarak Steps Down Under Rays of the Jan 4, 2011 Solar Eclipse.

Well, just as I prepared to post the natal horoscope of Hosni Mubarak with the transits of his pathetic address last evening placed around the chart (see below), the astounding news broke during this morning's broadcast of Democracy Now!. In my elation I shall place the chart here anyway and hope you may click to enlarge the image and read a few notes for yourself.

The horoscope is set for his birthdate May 4, 1928 Cairo (Kafr-el Muselha cannot be found on maps or in my software) at the moment of a Full Moon with Sun 14Tau05 conjunct Mercury (a picture of extreme stubbornness right there) and Moon 14Sco05, a combination of terrific stubbornness, ruthlessness, and fixed prejudices. I use the Full Moon of his day of birth because there was one at 10:11:41 pm EET.

Transit Saturn 17Lib01 Rx conjoins his natal Full Moon's Midheaven (Career; Public Standing; the WHY? Point) showing restriction in these matters for those who have dealt unwisely with responsibilities in the past (30 years of oppressing and robbing his people) - Saturn brings accountability to this ruling tyrant.

The iffy situation for the US may be seen in part by tr Saturn conjoining US Secondary Progressed Mars which has been retrograde since 2006. Tr NN 1Cap19 is rising in this speculative natal horoscope along with Mubarak's Pre-Natal Solar Eclipse Series, 1 South @ 1Cap21: 'enthusiastic expression of ideas; flooded with options' (Brady) - but the only 'option' the people wanted him to take was to Go Away!

It is reported that Mubarak has left Cairo now for a resort (to rest up, poor thing)and must be fuming beyond belief. My hope and prayer is that the Egyptian people will be fairly and well treated by whoever steps in to fill the vacuum of power - and that their accounts will be balanced by a return of the millions, possibly billions, hidden away in Mubarak's secret accounts and which will necessitate putting him on trial.

Is there a spa for former dictators at The Hague? 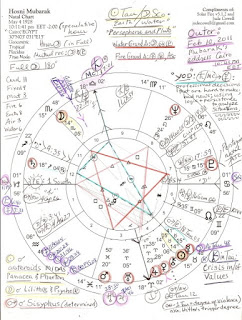 I read somewhere (but didn't save it, dangit) that Mubarak's resignation occurred 30 years to the day of the deposing of the Shah of Iran. If true, that suggests a Saturn cycle.