Shown: America's natal horoscope with Uranus in Gemini Rising July 4, 1776 2:22 am LMT Philadelphia, Pennsylvania; it remains a Venus Hour as in the US Sibly chart, and Venus, Mars, and Pluto retain their out-of-bounds status.

The following is one of the several potential birth charts for the founding of America. There are two historical hints as to the potential for this chart's use: Benjamin Franklin's famous image quixotically smiling in front of Independence Hall Clock, the hands of which point to 2:22 (or 2:21, if you prefer) which could be pm or am, plus, a tale of Thomas Jefferson overseeing Mr. Dunlap, printer of the Declaration of Independence, at such a late hour which times the first copy of the Declaration to come off the press. Whether either hint is correct, I do not know. But considering the horoscope which results from using this birth time, it's an interesting chart to investigate.

For one thing, there's the then-recent discovery of a planet which relates to freedom, independence, individualism - yet Aquarian groups - and rebellion, Uranus. Typically associated with our nation and the American Revolution, Uranian traits describe America in a nutshell. Add to that, the of-for-by-government of an Aquarian Moon (Moon = we-the-people) near MC, the Goal Point of the chart, tells of Aspirations and Public Status for a democratic government...yet these days, reptilian brains have taken over what should be our helm and forced our aspiration to go on life support.

Having Uranus rising, the higher octave planet associated with Aquarius (with Saturn ruling AQ) supports our Aquarian Moon at Midheaven and gives the nation a Moon-Saturn-Uranus vibe. (The November 2008 presidential election occurred during a Saturn-Uranus opposition = status quo v progress; the battle goes on.) 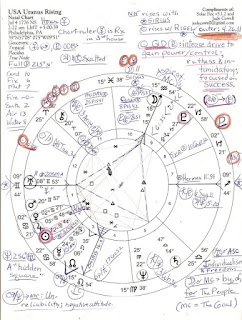 In this chart, three of our natal planets 'back up' one degree in the Zodiac when compared to the usual 'Sibly' version of our national birth chart. These are, in order of rising: Mars ('21Gem' = "A Labor Demonstration"), Venus ('3Can' =
"A Man All Bundled Up in Fur Leading a Shaggy Deer" - Venus precisely conjoins 2nd cusp 2Can21), Sun ('13Can' = "One Hand Slightly Flexed With a Very Prominent Thumb". This picture always reminds me most of former President Bill Clinton who couldn't seem to give a speech without leveling his thumb at us.)

Our telling Sabian Symbol for natal Jupiter ('6Can') remains the same, "Game Birds Feathering Their Nests", which refers imho to the nature of the Corporate Venture at the foundation of the New World Atlantis, America, the Colossus which was invented and always intended to straddle the globe in the future, the realm of progressive Uranus.

Naturally, planets are posited in different houses (departments of life) here as opposed to the Sibly chart. And our nation's tendency to go to war based on lies and false reports (duplicitous Gemini) is well-represented by the warring, rebellious, violent, explosive Mars and Uranus pair rising and in 12th H of Karma and Self-Undoing, and Mars in the 1st house of Self.

The Uranus Rising chart contains a Grand Trine of sorts but we must stretch degrees if we wish to include Uranus at ASC, Moon at MC, and our exalted-in-Libra Saturn in 5th H. Our Cancer planets continue to keep us sentimental for the past and how things used to be; the 2/8 Desire Axis of Money, Resources, Credit, Debt, Death, and Transformation is highlighted by Venus, Jupiter, and the Sun (leadership); Venus and Jupiter are associated with money, banking, and evaluation issues. As you see, transit Pluto in early Capricorn is now visiting the 8th house of this chart; the upcoming US Pluto Return will fall in the 9th house of this natal chart...transforming philosophy?

Of course, for conspiracy theorists of the Invisible Government persuasion, there's natal Pluto in olde countrie Capricorn which hints at secret controls and manipulation (Pluto) coming from abroad (9th H) though the Sibly chart (5:10 pm LMT) gives a strong plutonian picture as well: controlling, obscenely wealthy Pluto (global banks, ancient bloodline rulers) in 2nd H of Money and Earning Ability, as The Fed controls the US government by printing its money.

As you know, America's natal horoscope with Uranus Rising gives a different chart-ruler bwo Gemini: our retrograde Mercury in 3rd H (rather than the Sibly's Sag ASC ruled by an exalted Jupiter.) Plus, rising Uranus becomes a higher octave 'ruler' of the chart affecting our nation on a cellular level yet on a higher plane as well (Uranus = genius, creative inspiration, the collective, and how one behaves which here, is like a multi-tasking yet possibly deceptive Gemini, sign of Communications and Trade.)

America's natal planetary aspects which are problematic are retained in this chart: a Sun/Saturn square, a Mars/Neptune square, and our Mercury/Pluto opposition of propaganda, surveillance, spying, and obsessive thinking about wealth.

Besides Moon 18AQ15 rising with SIRIUS, this chart shows two major Fixed Stars - Royal Stars of Persia - one rising and one setting. These stars are not quite angular in the Sibly chart but here we have them prominent.

The Watcher of the East, Aldebaran (Alpha Taurus) indicates 'success through integrity', 'facing moral dilemmas that challenge integrity', 'great honor that will not last', and 'success that will make enemies'.

The Watcher of the West, Antares (Alpha Scorpius) indicates 'toughness and pugnaciousness, 'good for military careers', 'keen mentality and courage with a caution of self-destruction', 'going to extremes either intentionally or unintentionally', 'successful efforts honed through the fires of experience', and 'ruthless and obsessed with success'.

Well, Spring is a busy time around here so my blogging hours have been minimal of late, plus, I always take a little time off for Easter, the most important 'holiday' of the year.

So if you've never viewed America's Uranus Rising natal horoscope, here you go, with my compliments. There are more factors worth mentioning, of course, but my schedule decrees that I ask you to consider this posting of the chart as a reference point for further discussion. Watching transits and progressions that affect this version of America's natal chart may be of some interest and I hope you'll investigate as you wish!
Posted by Jude Cowell at 11:04 AM